Neil Boland would like to focus on Waldorf education as an education for social justice, to explore how Rudolf Steiner phrased this a century ago and then consider how it can be approached in a twenty-first century context. What the author wants to encourage here is a wider conversation, wider debate on social justice within Waldorf education, what it might mean, what is (not) working, how the ideal can be strengthened and how we can engage more widely with social justice partners to facilitate this.

Social justice has multiple meanings, but for me it is that all members of society are acknowledged as of equal merit, value and importance. In addition, no group or groups within society should be privileged to the detriment of others, be that based on gender, class, wealth, resource ownership, culture, belief or non-belief, ethnicity, sexual or gender orientation, education, physical or mental abilities, epistemological viewpoint or other identifying characteristics.

Waldorf education has its roots in the movement for social renewal envisioned by Rudolf Steiner, the three-fold social order. This movement was created at a time of great social upheaval and need after the First World War and the Russian Revolution; the world is perhaps at another moment of great social need. Waldorf education is the child of this movement which has found greatest success and acceptance in the intervening 100 years. There are praiseworthy instances of Waldorf schools working strongly with notions of social inclusion and social justice. Individual teachers work hard and achieve similarly praiseworthy results. Of the three independent areas of the movement for social renewal which Steiner identifies, I am going to be taking two, the legal sphere and the cultural sphere.

Legal and cultural sphere
In the legal sphere, equality reigns. The current English translation of Towards Social Renewal puts it like this: “In the political and legal sphere, each individual has an equal voice simply through being a human being” (1). I find it a call to action as many people in our societies so manifestly do not have an equal voice.

In what Steiner calls the cultural sphere, we are free, all different, all individual. I would like to take freedom in the same sense as Bloom when he points out, “By freedom, Steiner meant it in the spiritual sense rather than political. Each person must be left free to form her or his identity” (2).

Now I presume that you agree with these two ideas - that all people should have equal voice simply by being human beings and that each person should be left free to create their own identity. However, as Steiner also says in Towards Social Renewal, “People do not always judge their own motives and impulses correctly” (1), and therein lies the rub.

We live in a world in which social justice is not realised. Racial discrimination and attacks, religious intolerance, increasing inequality, the plight of refugees and immigrants, oppression of minorities are all in the news. We read of fear, oppression, intolerance and suspicion around the world. Sexism and patriarchy are not new to any of our societies, neither is the affluent minority being able to wield power over the less well-off majority. Many of us grew up in societies which were to a greater or lesser extent homophobic, white-dominated and which saw gender as a binary concept. Many of us grew up in societies in which the indigenous inhabitants of the lands we live in were often marginalised, forgotten and not considered part of current debates.

Education cuts both ways
What we can lose sight of is how this influences what we think, feel and do. It is difficult to have lived through the past and not have been influenced by systemic racism, sexism etc. These form unconscious biases which we then can unwittingly carry into our work and so perpetuate. Education cuts both ways: it can empower and liberate; it can work just as easily to replicate the inequalities and injustices of our societies. We may well be people of goodwill, wanting to do good in the world, but have we identified things which might be holding us back?

What or who do those biases involve? They involve difference, dealing with the Other, with people who do not come from dominant groups in societies (some of these change according to society, some seem to remain constant). They can include being of non-dominant gender (aka female), different colour skin, different religions, different world views and historical perspectives, different sexual identities, different expressions of gender, speakers of other languages, those who dress differently, the handicapped, the poor, refugees, the homeless. The list goes on. If Steiner’s ideal was that everyone has an equal voice by virtue of being human, how well is that expressed in the society you live in? What do students learn about these groups within their Waldorf education? Is what students learn nuanced and rich in complexity?

In order for people to have equal voice, it is necessary as teachers to identify ways in which we unconsciously and unintentionally discriminate and, unwittingly and unwillingly, are ourselves biased (3), so we can experience “what it means to unlearn certain regressive behaviours, ideas, habits, and values that the dominant culture imposes on [us] as second nature” (4). Without this first step, worthy actions we undertake in the direction of social justice can only have limited success.

Social renewal
The roots of social justice in Waldorf education are long and deep. The education was established in order to renew society. It is possible that this impulse has to some extent been eclipsed by the myriad other concerns and challenges schools and early childhood settings face.

I would like to suggest that this initial aim be revisited in light of two short passages by Steiner. The first comes from Towards social renewal again: “Social structures continually give rise to anti-social forces. This has to be overcome again and again” (1). A similar quotation comes from The Fall of the Spirits of Darkness which is both stimulating and sobering:

“We … must seek ever-new ways, look for new forms over and over again … however good the right may be that you want to bring to realisation - it will turn into a wrong in the course of time.” (5)

A final quote from Steiner draws attention to the notion of inclusivity. “All those who think about the proletariat [Steiner’s term] rather than with it have only the vaguest notions … notions which … can have a harmful effect” (5). If we expand what Steiner says here about the working class to any group, when wishing to act for social justice, we have to work with groups, not do things for them or teach about them. This challenges the notion of the well-meaning, liberal teacher as ‘do-gooder,’ wanting to help the disenfranchised. How do you work with or think with marginalised groups? This can be as simple as reaching out and contacting people, visiting them, asking advice on how to bring minority viewpoints into lessons, asking for advice on the complexities of alternative readings of history, belief and worldview.

Social justice as a notion seeks to level the playing field, to empower the disenfranchised, to acknowledge the forgotten, to give voice to the marginalised. It is challenging and uncomfortable as well as rewarding, complex and not given to quick fixes. Above all it is an open-ended process, a process which, once entered into, does not stop, working towards an unrealisable ideal which must, nonetheless, be striven for.

Lastly, working towards a socially just education can be linked to striving to embody aspects of the consciousness soul, taking Elan Leibner’s definition of the consciousness soul (6) as the “empathetic soul”. For me, working towards social justice, towards inclusion and decolonisation requires and is what happens when you have empathy for the Other. Feeling within yourself how the Other suffers when marginalised, oppressed, caricatured or rendered invisible, and not just understanding or knowing it, marks the beginning of change. It is an important step towards social renewal, which lies at the heart of the Waldorf movement.

Neil Boland is senior lecturer in the School of Education at Auckland University of Technology in New Zealand. His research interests include Steiner's indications on music for young children, the contextualisation of Steiner education in non-European cultural and geographic settings, and issues around assessment. His work involves promoting the conversation between the Steiner education movement and other educational philosophies.

(4)   Giroux, H. (2019, August 15). Now is the time to break the spectacle of ignorance and violence. Retrieved from https://truthout.org/articles/henry-giroux-now-is-the-time-to-break-the-spectacle-of-ignorance-and-violence/

(6)   Leibner, E. (2017). Between our demons and our gods: Human encounter in the light of anthroposophy. Paper presented at the AWSNA Summer Conference, Portland, OR. 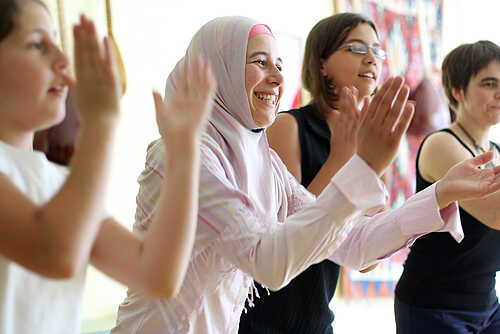