Why are we so infatuated with our little gadgets? Smartphones and similar devices have become an indispensable part of our lives, of ourselves. Sending and receiving messages, checking information online or sharing pictures are activities deeply interwoven in our routines; they are an undisputed element of our existence. How is it possible that a tiny box is able to hold us spellbound? What do teachers and students need to know about the effects for the brain?

My daughters keep their smartphone or iPod on their desk while doing their homework, they send and receive messages while revising French vocabulary or labouring over some algebra problem. They tell me that homework is just so boring without a mobile device within reach.

At our school, mobile devices are banned during lessons, in classrooms, corridors and playgrounds. And yet, it is an open secret that during recess the upper school students check their smartphones for messages, recklessly hoping in true teenage fashion that they won't get caught and their phones confiscated for a few days. They quickly scan their in-boxes while simultaneously chatting to several friends on different subjects at once; while devouring enormous amounts of biscuits

Many adults also feel closely tied to their little devices. I hardly ever go out without my mobile phone. Is it because my daughters, parents, friends or even my boss might want to get in touch? Do I want to feel indispensable? Or has the little gadget some kind of power over me?

My brother, an average Swiss businessman, keeps his smartphone within reach during Sunday dinner with our elderly parents. He informs me that it is completely normal for him and his colleagues to check their phones, to text or to write short emails during business meetings.

In 2013, 78% of American Teens owned a cell phone (i). In Switzerland, a staggering 97% of 12 to 19 year olds owned a smartphone in 2014 (ii) Worldwide, 63% of the population uses mobile phones and this figure is forecasted to raise to 69.4% by 2017 (iii) The first Digital Natives Generation - born 1980 or later - has long left school and might well be teaching our children by now. Undoubtedly, smartphones are part of teenagers, young people's and indeed many teacher's lives in most countries with Steiner Waldorf Schools.

Should we worry about the omnipresence of mobile devices? Bestselling author and neuroscientist Daniel Levitin says we should. In his book The Organized Mind (iv), he explains what happens in the brain when we receive a message or email: It increases the production of the hormones cortisol and adrenaline and creates a dopamine-addiction feedback loop. Levitin warns: “Make no mistake: email-, Facebook- and Twitter-checking constitutes a neural addiction.”(v) Why is that so?

People are normally reading and writing SMS or other messages while doing something else. Smartphones and other mobile devices play a crucial role in multitasking. I might be listening to Gardeners' Question Time on Radio 4 while chopping the carrots for tonight's dinner and texting a colleague in between. Then I glance through my inbox and answer my daughter's questions about the French Revolution while feeding the cat.

At school I see teens use their break to show each other pictures on the smartphone, write a WhatsApp message and touch up their make-up while staring in horror at the parallelogram law of vector addition they need to memorise for the next lesson.

Rideout et al (vi) studied teenagers medial multitasking habits in 2006. A seventeen year old boy describes his daily life in these words: “Every second I spend online I am multitasking. I am watching television just now, check my inbox every two minutes, read messages and download some music while writing this message.” And a fifteen year old girl says: “I am constantly messaging friends, look at my mail, do my homework or play a computer game while I talk on the phone.”(vii)

Most of us use digital gadgets in multitasking, teens and adults alike, and even though we think we are doing several things at once, we are actually just rapidly switching between tasks “like a bad amateur plate spinner”, says Earl Miller, neuroscientist at the MIT and an expert in the field of divided attention. He warns that “digital multitasking increases the production of cortisol and adrenaline which may overstimulate the brain and cause scattered thinking.”

Furthermore, rapidly shifting attention causes oxygenated glucose to burn up quickly. This is disastrous because oxygenated glucose is the very stuff we need to stay on task and so we soon feel exhausted and disoriented, explains Earl Miller.(viii)

Another crucial player in the game is dopamine. This hormone causes us to seek new information, new stimuli, it makes us feel energetic and keeps us motivated. However, every bit of new information, each new stimulus, every text message, every ping from our smartphone rewards us with more dopamine which in turn makes us want more. This is how we get caught in the dopamine feedback loop of the limbic system (x). To make matters worse: Unpredictability and anticipation also stimulate the dopamine system. This is what keeps gamblers glued to the slot machines: They expect their next game to be their big win but can never be absolutely sure. Anticipation and unpredictability flood the brain with dopamine which in turn compels us to seek the next stimulus.(xi) And you and I never know who the next sms, the next email might be from or what it might say: heavenly conditions for dopamine production, indeed.

It comes as no surprise then, that teens keep their smartphones next to them while doing their homework because “it is so boring without it.”

What are the benefits of undivided attention?

The above findings might motivate us to use our devices more consciously and enjoy the calming effects of lower adrenaline, cortisol and dopamine levels. And here are the good news: there are plenty more benefits to reap when we concentrate our undivided, focused attention on one task only. For one, “staying on task uses less energy than multitasking and actually reduces the brain's need for glucose.” (xii) In turn, the available glucose enables us to stay on task and explore a topic in depth; a positive loop!

Further, in-depth study causes stronger growth of the synapses; these are vital for the transmission of information in the brain. Undivided, selective, attention intensifies information processing; the information is being processed in many different parts of the brain because it has been “spread” via the synapses which therefore grow stronger and more diverse. The intensity of this process then causes the information to be stored in our memory much better than information which has only been glanced at.(xiii)

Who is the captain of my soul?

Being able to focus our attention on what we chose rather than on what just happens to land in our in-box, choosing our own reaction to any given situation, is closely connected to self-control and willpower. Self-control is the ability to inhibit impulses and reflex-like behaviour. It originates in and is controlled by the higher-level thought centres in the prefrontal cortex.(xiv)

Walter Mischel showed in the marshmallow experiment that children as young as four who were able to control the impulse to eat a marshmallow placed in front of them grew up to become happier, healthier and wealthier adults than those who could not resist. Amongst other positive effects, their relationships were more stable, their level of education higher and they were less likely to be involved in drug abuse and crime.(xv)

Manfred Spitzer explains the connection between stress and self-control: It is not the actual situation which causes stress but the amount of control we feel we have in the event. (xvi) In other words: The more control we have in a situation the less stressed we feel. Self-control clearly reduces the levels of stress. In connection with digital multitasking this means that I reduce stress levels whenever I chose whether, when and how we react to a text message, an email or any other form of distraction.

And here is one more benefit: directing your attention to what you choose also means that you can choose to direct your focus towards the positive aspects of any given situation. And this makes you a happier person. Barbara Fredrickson, a psychologist at the University of North Carolina, has shown that focusing on positive feelings expands your world. “Being able to control your attention gives you a lot of power, because you know that you don't have to focus on a negative emotion that comes up,” says Nobel prize winner Daniel Kahneman. (xvii)

To sum up: Fast, spontaneous, superficial activities such as the ones required by WhatsApp messages and email are driven by the cravings of the limbic system. Thoughtful, in-depth, focused activity on the other hand is under the control of the higher-level thought centres in the prefrontal cortex. This is crucial knowledge for teachers and their students alike.

Karin Smith does not own a smartphone but even with her standard mobile phone and ordinary laptop computer she occasionally succumbs to the lure of digital multitasking. She is a teacher, translator and editor and lives with her two daughters in an old farmhouse on the outskirts of Berne, Switzerland.

i Teens and Technology 2013. PewResearchCentre at the Berkman Centre for Internet and Society at Harvard University

x This is the “feeling” part of the brain, primarily responsible for our emotional life

xiv This is the part of the brain involved in inhibiting emotional reaction. It is our newest and highest form of intellect. It has the potential to separate itself and is the most objective part of the brain. 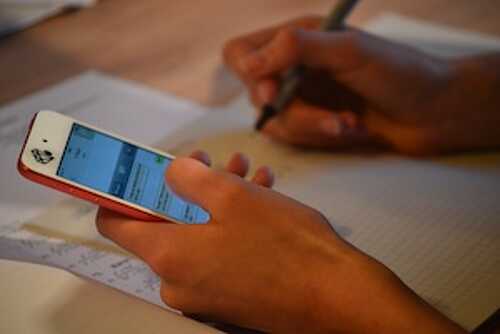