The ideal of compromise? No such thing! (Part 2)

This second part of Trevor Mepham's reflections on the issue of compromise concentrates on childhood and curriculum. Rather than turning to specific school subjects, Trevor explores the curriculum from the angles of time, place, communication, money, nutrition, relationships and coherence.

In the first part of this article, attention was given to the concept and nature of compromise and how such a predicament or approach impacts on the principles and practice of education. A compromise is rarely considered as a positive choice, but more as a negative response to a given situation. In contrast, education is like a magnet for ideals and the best that can be imagined. Put like that, ideals are generally seen as being about high aspirations, whereas compromises are usually regarded as falling short of such ideals. In part one, the following notions were explored:

In part two, the discussion turns to a consideration of childhood and curriculum.

In the 1940s, the theoretical physicist David Bohm was working on the Manhattan Project, which culminated in the detonation of an atomic bomb. His interests spanned quantum theory, philosophy of the mind and neuropsychology. In looking at the habits of thinking, Bohm (1991: 15) suggested that the ways in which we tend to think and therefore act, are often regurgitative, working to hold back progression and renewal:

"[Thought] seems to have some inertia, a tendency to continue. It seems to have a necessity that we keep on doing it. However . . . we often find that we cannot easily give up the tendency to hold rigidly to patterns of thought built up over a long time. We are then caught up in what may be called absolute necessity. This kind of thought leaves no room at all intellectually for any other possibility, while emotionally and physically, it means we take a stance in our feelings, in our bodies, and indeed, in our whole culture, of holding back or resisting. This stance implies that under no circumstances whatsoever can we allow ourselves to give up certain things or change them."

The idea of absolute necessity is germane in considering the concept and nature of compromise. Whether one considers the pitfalls of compromise, or the opportunities, it seems that the baggage that accompanies the term is often negative. Suggestions that a compromise implies or requires that something has been watered down, given up, or even ruined, are a long way from the spirit or the reality of a promise that has been made together (com-promise); an understanding that paves the way for a new development or opening.

The idea and practice of compromise can stir the juices and create tensions over matters of principle, theory and tradition. One person’s compromise is another person’s sell-out. Alternatively, someone who cannot compromise might be regarded as reactionary, or stuck in the past. Naturally, or perhaps especially, this clash of views pertains to a discussion of Waldorf principle and practice.

Steiner is reported to have said that if, in years to come, all his work was destroyed or forgotten, the essential, enduring contribution was his book The Philosophy of Freedom (1979). If this anecdote is true, it’s an interesting comment on the seminal importance with which he viewed that particular book. Might it also mean that some of his work needs to be understood as being within an applied context – important, yet temporal and local? Steiner undoubtedly operated within a set of social, cultural assumptions. In addition though, he claimed to be able to speak from a space uncluttered by those assumptions; a context of far-reaching and deep-rooted consciousness that can be renewed and is essentially not dependent on time, or culture. Such a prospect provides an invitation to research and renew, in order to bring about innate innovation and to re-apply first principles. On the other hand, one can imagine that such a prospect could act as a catalyst for forebodings and anxieties regarding change for change’s sake, or a dumbing down of the original work and primary research findings.

Does the concept of childhood face a similar dilemma? Is there something innate or fundamental about a healthy childhood; a conceptual core that grows from a set of principles that are universally applicable and unchanging? Or, does it all depend on context and environment; time and place? There are, after all, many childhoods possible in the world, both now and long ago. Take, for example, the splendour, care and protection lavished on the young Prince Siddartha-Gotama. Compare such a childhood with the miserable and frightening passage of a child who is abused or orphaned through war; and all the childhoods in between these two extremes.

If childhood is considered to be simply an environmental feature, or social phenomenon, we can talk either of an environment of animal fables, knitting and freshly-baked bread, or the social context of long days spent picking over rubbish heaps in faraway places, or 12-hour shifts making Adidas footballs in filthy, unlit, back-street sweat-shops. However we think of childhood, it is clear that the experience of childhood is not ‘given’, or innately ‘good’. Around the world and through the ages, children have experienced their childhood days across a wide spectrum, from the sublime to the dismal.

As teachers and parents, we are prime participants in creating childhoods for our children. What sort of childhoods will they be and what contributions can we make? Childhood resembles a field that children journey through. Children will pass through it regardless, so what kind of field do we make? What condition is the soil? How deep and even the furrows?

When considering what we can do, how might we act and work with children, with childhood and the world in which we live, Dostoyevsky, in the Brothers Karamazov (2003) offers what I think is an enduring truth for children and childhood.

“. . . there is nothing higher and stronger and more wholesome for life in future than some good memory, especially a memory of childhood, of home. People talk to you a great deal about education. But some good, sacred memory preserved from childhood – that is perhaps the best education. For if a man has only one good memory left in his heart, even that may keep him from evil . . . And if he carries many such memories with him into life, he is safe for the end of his days.”

Here is something which parents and teachers alike can really dwell on, with hope and energy. It hints at something that might be in our promise to children.

The term curriculum offers at least two rather different meanings – a fixed body of knowledge & practice, or a field in which to roam and explore. Put very crudely, a curriculum can be given over to training, or learning, or both. Techniques and skills tend to be attributed to training and applications, whereas principles tend to focus on values and starting points; ideas and ideals. Education embraces both principles and applications. They are the wings of learning. The Latin word currere conjures images of movement, flow and exploration; a matter of heuristics. A more limited view of a curriculum would be of a straitjacket, or a fixed canon of knowledge that is delivered and imbibed, but not necessarily questioned or challenged, and certainly not renewed.

If the curriculum is a flowing course what of the banks that give the river its integrity? How can a curriculum help to bolster life’s infrastructure and nourish the zest of childhood? A curriculum worth the name feeds into the journey towards a creative, considerate, loving, responsible life. In varying degrees, every curriculum is a vehicle for content. In addition to what, a curriculum must also consider the how, why and when questions. Perhaps a curriculum outline is most helpful as a tool to hone observations of children and childhood and their development in this society, not a previous one. Therefore, there are bound to be new areas, new features, in which the principles need to be applied afresh. In that regard, I want to touch on some present-day themes or topics that could be pictured as the banks of the curriculum river. By attending to these aspects, I would argue that we are underpinning the banks and preventing the erosion of curricular relevance and timeliness.

A while ago, I was speaking to a primary school teacher of long-standing. She had been doing project-work on the Great War (1914-18) with her class of 9 year-olds. In the creative writing activity, one of the boys wrote about life in the trenches: “I woke up and felt cold, wet and tired. Would I live through the day? I felt really bad and decided to text my girl-friend.”

Adults of 35+ struggle to understand what it is to be born in an online world, where just about everything is networked or downloadable. Likewise, today’s children cannot understand that the ‘www’ just wasn’t here before 1991; that phones used to be fixed to wires that travelled through walls and that music was once piped from a box called a record player, or a ‘hi-fi’ cabinet. So, the theme of technology, as opposed to gadgetry, is calling us, linked to a study of the development of communication through time and place – thematic learning that straddles history and geography, culture and innovation and, crucially, health and well-being.1

In the pedagogy and curriculum guidance that Steiner outlined, coherence and progression are approached via a pathway of practical, experiential learning, imaginative-aesthetic judgement and conceptual-cognitive exploration. Notions such as developmental learning readiness, analysing the parts of an identified whole and the positive role in the learning process of forgetting and sleeping, all serve to support the establishment and flourishing of coherence in the learner.

In an address to open the Waldorf School on 7th September 1919, Steiner (1996: 16) articulated the essence of his educational vision. All the trappings are stripped away and we are left with:

In the end, that is what education is.”

For an ‘uncompromising’ statement that is open to renewal and reform, free of dogma and tradition-lite, it takes some beating

Trevor Mepham is Principal of the Steiner Academy Frome, a publicly-funded 'Free School' in Somerset, England. In previous jobs he was Principal of the Steiner Academy Hereford, and Co-Director of the Steiner BA Programme at the University of Plymouth. Prior to that, he worked as a Class Teacher at the South Devon Steiner School. He has also worked as a classroom adviser and served as a member of the Executive Group of the Steiner Waldorf Schools Fellowship (SWSF) and the European Council for Steiner Waldorf Education (ECSWE). He is a Trustee of the charity, Children of Peace - an organisation committed to working with the children of Palestine and Israel to build peaceful, positive relationships for a future generation.

1 In 2013, Facebook was 9 years old. It is argued that social networking sites and on-line existence will have a significant impact on brain development. In 2009, Susan Greenfield suggested that there are three areas of concern: the ability to make real-life conversation with other people, the effects on attention-span caused by rapid interchange of action-reaction, instant screen images, and the ability to empathise. Mass autism could be one of the outcomes. “By the middle of this century, our minds might have become infantilised – characterised by short attention spans, an inability to empathise and a shaky sense of identity.” (The Guardian, 24-02-2009)

2 In the BBC Medical Review (February 2009): it was reported that around 27 per cent of children in the UK are overweight and the research suggested the main problem is a continual reduction in the amount of exercise children take. Many overweight children have overweight parents - it's often a matter of family lifestyles. Obesity increases the risk of insulin resistance and Type 2 diabetes which is normally a disease seen in later life in adults. Increasingly, children in their teens are presenting with Type 2 diabetes as a consequence of being obese. There are also marked psychological effects of obesity leading to low self-esteem. 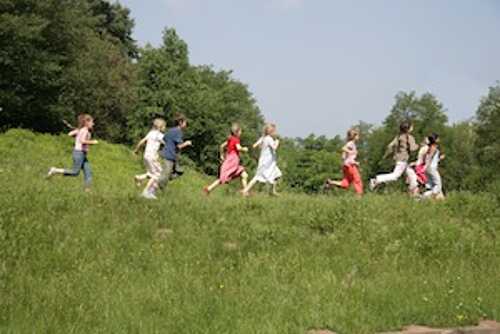