How does methodology perform an alternation between thought, feeling and will?

“The First Teachers Course"* of 1919 is the basis of Waldorf Education. In this series of interviews, we ask one key question to Waldorf educators worldwide on each historical day of the course. Here are some thoughts on Day 6 from Irceu Munhoz, a class teacher at the pioneer school in Brazil, the Waldorf Rudolf Steiner São Paulo School.

Thinking, Feeling and Willing during classes: a soul exercise!

For a long time, the understanding of the human being was distorted. After the Council of Constantinople, in 869, the propagation of the idea that the human being was constituted by just body and soul resulted, in this way, in the extinction of the spirit. Much confusion still occurs because of this dogma, so widespread in the Western Christian world.

In the 18th century, Schiller reviewed such study and proposed that the human being possesses within itself an animal nature, visibly confirmed in its basic instincts. He pointed out that there are also very high aspects and areas in the human being, that is, of spiritual nature. But, what in fact differentiates humans from animals and from spiritual beings would be a third, very peculiar nature, which he called "playful impulse".

This area would be located between the animal nature and the spiritual one. According to Schiller, this intermediate area would be essentially human, and from where fantasy and creativity would come. It would also be the origin of inspiration, artistic action, and play.

We see here again the threefold human conception. Schiller recognized an animal realm, and a spiritual realm, but he also perceived that the human being possessed something else, connected to aspects of a playful, artistic, emotional and sentimental nature.

Rudolf Steiner took up these observations in his composition based on the anthroposophical worldview of the human being. Criticizing the council of Constantinople, he reestablished the place of the spirit within the human constitution. For him, the integral human being is made up of body, soul and spirit. Since then, all the currents of study of anthroposophy have been based on the understanding that the human being needs to develop fully and in its triple greatness: Will, Feel and Think.

Anthroposophy is a philosophical-spiritual current of practice. Everything that arises from that hovering has practical purposes. However, it is very important to emphasize that the human being is the source from which the theoretical and practical conceptions linked to these impulses spring. A good example to clarify this statement is Waldorf pedagogy.

We have a good image to illustrate that: Waldorf pedagogy is like a shoe that grows along with the foot! In other words, it is from the anthropological needs of the human being that Waldorf pedagogy builds its form. All the study plan and methodology, from kindergarten to high school, come from the anthropological study of anthroposophical nature. Nothing happens by chance or because a government demands, but because there is a search to understand the human being in its different biographical moments and from that study we try to provide the correct "food" for each moment of school life, aiming to provide a healthy development for the human being and searching for the paths that lead him to conscious autonomy and freedom.

That goal is the foundation of the entire Waldorf pedagogy: to educate the integral human being, that is, threefolding: body, soul and spirit, and from the recognition of its broad nature, considering its different biographical moments in the distinctive septenniums of school life. Provide the right food, at the right time, to generate health!

Bearing that in mind, Rudolf Steiner proposed that education be an art that could embrace the human being as a whole, developing its capacities of Willing, Feeling and Thinking. How could that art of educating consider all those human needs in practice? For this, he left us many notes and contributions, all based on an anthropological perspective. The literature on Constitutional Types, Temperaments and Planetary Qualities are supports that guide us in the search for human understanding as a starting point for pedagogical practice.

Thus, Waldorf methodology is presented as a tool that provides the human being with the contents that, from the anthropological study, were understood to be appropriate for a healthy development and an improvement in physical, motor, and mental capacities as well as social, emotional and also intellectual faculties of the human being.

Put into practice, Waldorf pedagogy functions as an "academy" of modern times, where not only the physical body but also the human soul is exercised.

Every day we provide gymnastics of the soul in search of knowledge. In all classes we exercise the qualities of human Will, Feeling and Thinking. In a class, a student does, moves, writes, draws, works with the hands and also uses all that will power to get involved in a narrative or in the observation of an experience. In other words, doing is very alive and daily. Every day the qualities of the Will are polished and strenghten during classes.

The same thing happens with Feeling. Everyday, students behave according to the qualities of that sphere of the human soul. Making judgments about the issues presented by the teacher, placing their subjectivity in front of the group, that is, the judgments weave a fabric of individual points of view, based on an objective presentation, or an experience, or a narrative. In this way, the human rhythmic sphere enters the scene, exercising, strengthening and appropriating the contents.

Students also play instruments, sing, paint canvases, carry out social activities, among many other actions that allow the forces of the human soul, full of the senses, to flow and take the world into the being. As a counterpart, the human being can, through art, for example, give the world a bit of its individual essence. That exchange is fantastic and, as Schiller said, it actually makes us human.

Everything that was presented through an experience or a narrative, or even through creative ways that the teacher found, to lead the students towards content, was experienced through the will power of each one, to connect integrally to the esplanade and be flooded by the contents. Later, these students will behave in accordance with these forces, in building something concrete for the future. We are talking about the exercise of Will. After having experienced the contents by the force of the Will, it is time to practice the judgments from the Feeling. Each one prints in what was external and common to all, their own subjectivity, that is, the class is now in the emotional sphere, that of sympathies and antipathies, the group that was flooded with sensations and feelings after hearing a narrative or be surprised by an experience, you can now appropriate all of that through judgment. We observe here the development of the areas of Will and Feeling during class.

There is a very important aspect of the knowledge process built in a Waldorf school. During the night, the students connect to the spiritual world and thus, establish connections with the essence and the archetypes that live there, they get, with more vigor, to experience the world in which they were in prenatal life, bringing from that night experience, many treasures that will be collected by the teacher aware of that, the next day.

For us Waldorf pedagogy, the knowledge process does not stop when we sleep, that is, sleeping does not just mean "recharging the batteries" to relearn the next morning refreshed and ready. We believe that sleep is a very valuable stage in the knowledge process, because through sleep we access the spiritual spheres and from there we bring contributions to the dynamics of understanding the sensory physical world. That is our task in the sense of continuing the work of the spiritual hierarchies, as regards the path of evolution of the human being and of humanity. We are members of a nocturnal community, which breaks through the essential amplitudes, in search of true knowledge, alive and shared that leads us to freedom.

And here, in the morning, it was time to exercise human thinking. In retrospecting the content seen the day before, the teacher leads his group into the sphere of thinking. Remembering, reliving everything that was worked the previous day, moves the group in such directions, because human Thinking is linked to the forces of the past, just as Feeling is for the present and the Will is connected with the impulses of the future.

This is the third moment for the same content to be treated, what is being exercised in that "psychic gymnastics" now, are the qualities of human thinking. Through questions, the teacher then seeks to arrive at the concepts, laws, or even great ideas that would be behind everything that was discussed. Of course, at that moment the collection of what was absorbed in the spiritual world occurs and is decisive for such exploration. Many relationships and connections are made, giving rise to a new and young way of thinking. This is how a living, incandescent and elevated flame of human thinking is built. At this moment we are touching the spiritual, because we are approaching the world of essence, as Plato would say.

As we can see, a class transforms those three human qualities: Thinking, Feeling, Will and also dives itself into the spiritual world. And every day, several times a day, these human faculties are requested, visited and exercised, because the human being is a great being who needs to develop much more than just his thinking, and much more than just his doing and feeling, is the element that is poured out for wanting, bringing meaning to doing, as well as spilling over thinking, bringing warmth and sense to the healthy development of the human being. Every day, the students are genuine scientists, redoing paths of discovery and human conquest. This methodological process makes the student 'learn to learn', as he moves in search of knowledge based on his own soul forces. And when you "learn to learn," we become stronger and ready to unveil all the riddles that life may place on our paths. In this way, the statement that says that: The Waldorf school educates for freedom is more understandable!

Irceu Munhoz is a Class Teacher of the 6th grade at the Rudolf Steiner Waldorf School in São Paulo. This Waldorf school is the pioneer of Brazil and has been spreading the impulse of Waldorf pedagogy throughout the great Brazilian territory for 64 years. The number of Waldorf schools in Brazil has grown considerably and now exceeds 260!

* ‘The First Teachers Course' includes Rudolf Steiner's lectures on 'The Foundations of Human Experience', 'Practical Advice to Teachers' and 'Discussions with Teachers'. The core questions arose during the anniversary conference of 'The First Teachers Course' 2019 at the Goetheanum. Many thanks to the preparational help of Claus-Peter Röh, leader of the Pedagogical Section. The interview was conducted by Katharina Stemann 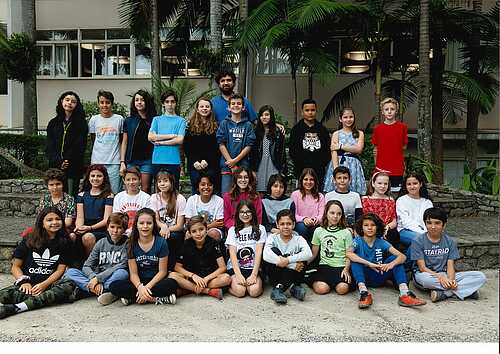