How are head and limbs connected?

“The First Teachers Course"* of 1919 is the basis of Waldorf Education. In this series of interviews, we ask one key question to Waldorf educators worldwide on each historical day of the course. Here are thoughts on day 10, from Martina Ivankovic, Psychologist and Waldorf Teacher in Chile.

"You always have to interweave the one with the other

That's what life is all about."

For some time now, I have been observing in myself and in the course of life, where this encounter occurs between what in the head is preserved as result, or reflection, of what I have already done or lived — a retained image of the past — and that which through the limbs wants to unfold.

I have perceived how clearly the extremities are called upon to set themselves in motion by the impulse of the future, which comes from outside to find us. The environment, if we prepare to receive it by opening our senses to it and are willing to contemplate it, brings an invitation to the new that wishes to be realized.

When I arrive as a teacher at each first grade class, I come with what has happened before engraved in me: what I learned yesterday with the children, in nature, or with other teachers and friends. I also come with something structurally prepared for the day's class and deeply connected with a longing for what might unfold.

In the same way that I come with something, I am aware of everything that comes to me: the sunrise, its light, the birds that sang that morning or the autumn leaves that I saw falling when I left my house. The greetings from the teachers and from each child: with bright, sleeping, happy or dreamy eyes; their stories and what they experienced this morning with their families.

Between the two, between what I bring and what comes from them to me, between what almost crystallizes in the thinking and what wants to become through the will, an encounter occurs. As the whole being enters into what is proposed or comes from outside, the interweaving of the soul with the world is resumed. An invisible and shared space begins to be filled with warmth: that of the teacher, of the children and – at the same time - of something greater.

In that invisible place between heart and lung, between warmth and rhythm, the human soul is interwoven and the possibility of creation comes alive. If we root pedagogy in the soul, it consists of a living encounter of the elements of one's being, the world and the children, emerging above this something new, greater.

To give of oneself, to sustain this encounter, and to receive what from the depths of each child wants to reveal itself, allowing this to permeate you before guiding it, is a high act of Love and Wisdom.

Pedagogy becomes an art if we – as teachers - allow our knowledge to illuminate what we see and be illuminated by what we live; if we let the future to flow from the extremities to warm the heart. Thus we connect head and limbs, and pedagogy becomes at the service of the emergence of new life.

Martina Josefa Ivankovic Silva, Psychologist and Waldorf Teacher, she is characterised by a love for life and nature, interest in the study and accompaniment of human development, as well as a vocation for human encounter and the transformations that occur from social interaction (Social Arts). By profession, she is a psychologist from Pontificia Universidad Católica, Santiago de Chile, with studies in anthroposophy that have led her to be a teacher of fourteen children in the first grade at the Michelangelo Waldorf School, Santiago de Chile, from this year 2020.

Michelangelo's Waldorf School is located in the heart of the city of Santiago de Chile. It's a school that's in its fourth year. Was founded by a group of six Waldorf teachers and a group of interested parents. There are two courses of kindergarten, first to fourth grade and high school. There are about 145 children, and a group of approximately 45 collaborators, as teachers, therapeutic team, administrative staff and artists.

* ‘The First Teachers Course' includes Rudolf Steiner's lectures on 'The Foundations of Human Experience', 'Practical Advice to Teachers' and 'Discussions with Teachers'. The core questions arose during the anniversary conference of 'The First Teachers Course' 2019 at the Goetheanum. Many thanks to the preparational help of Claus-Peter Röh, leader of the Pedagogical Section. The interview was conducted by Katharina Stemann. 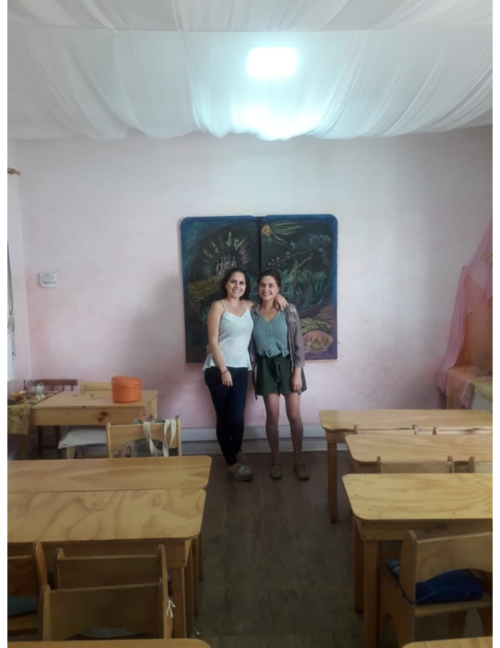