Development of the human being from birth to maturity

Moving, speaking and thinking are intimately bound up together in the small child. As the child grows older he or she becomes increasingly capable of utilizing these three main functions independently of one another. The following text explains this process in some detail.

At the beginning of life children are entirely embedded in the processes which build up the body. They are also fully dependent on their human and sensory environment. They start out on their earthly path by expressing in everything they do: "I do not want to remain as I am! I want to be like the grown-ups!"

Bodily growth itself expresses the fact that development towards maturity is not linear, for each phase is accompanied by its own possibilities and crises. The change of teeth and puberty are two marked events which hint at interruptions and turning points and thus divide the life of the child roughly into three parts each of which has its own specific subdivisions:

- The first phase: infancy up to the change of teeth.

- The second phase: from the change of teeth to puberty, i.e. the schoolchild proper.

- The third phase: from puberty to maturity, i.e. secondary school and young adulthood.

It would be wrong to see this as a rigid scheme, however. Any theory of fixed phases is quite rightly unacceptable in current educational science since such a theory contradicts living reality. On the other hand every physical change expresses a step forward in soul/spiritual development, as Jean Piaget has shown. (Jean Piaget and Bärbel Inhelder, 1969, "The psychology of the child." New York: Basic Books, original work published 1966. Jean Piaget, "The Essential Piaget", published by Jason Aronson, 1995.) We can only bring up children in the right way if we know what constitution is specific to a particular age. So apart from studying anthropology and psychology it is essential and indispensable to exercise unprejudiced observation.

In turning to a consideration of the specific qualities that prevail at different ages we must first point to Steiner's discovery of the different function systems in the human being: The motor functions belong to what has been termed the realm of the limbs and metabolism. Every movement is a bodily expression of the will. The rhythmical system - breathing and circulation - is the bodily expression of a human being who experiences and feels; fear, joy, pain and so on affect breathing and pulse. The system of nerves and senses, the consciousness pole as such, has its centre in the region of the head (brain). It corresponds with the activity of knowing. A human being is only healthy when all three systems work together and form a whole. We can all experience the benefits of a brisk walk after concentrated work at the computer which exercises only the head. If we want to concentrate our thoughts after a substantial meal we have to overcome a good deal of resistance. We are healthy when none of the three systems permanently suppresses the others.

It is possible to relate these three systems sequentially to the three phases mentioned above. Before the change of teeth children as beings of emotional "will" live primarily in their movements. Even their senses, their speech and thinking, are linked to movement and are thus for the most part bound up with the body. This is illustrated by the way in which four-year-olds, for example, immediately want to transpose anything they see or hear into movements of their own. This is how they learn to speak and also how they begin to play. It is impossible to imagine children prior to the change of teeth sitting with arms folded waiting for a meal to begin. Perception immediately triggers a will activity of the limbs. Inner and outer movement are still entirely intermingled.

Then, once the teeth have changed, inner movement begins to extricate itself from outer movement. A space of inner experience begins to form, which indicates that the rhythmical system is emancipating itself from the system of the limbs. This is also the age when the harmonious 1:4 ratio of breath to pulse begins to establish itself. Finally, when puberty is reached thinking begins to assert its independence. Human beings wake up in the exercise of their critical faculty, their voice deepens, their limbs grow heavy. It is as though the youngsters have finally arrived on the earth and are searching to find their individual personality. Needless to say, this involves a good many symptoms of transition as earlier experiences re-echo and future conditions are anticipated. The principal is that children wake up first in their limbs, then in the middle system connected with feelings and experiences, and finally in their head, the seat of critical thinking.

Since the human being forms a totality there are inner links between moving, speaking and thinking. These links have been largely confirmed by the immense progress made in brain research during the final decades of the twentieth century. An original and very readable summary can be found in Frank R. Wilson's "The Hand: How Its Use Shapes the Brain, language, and Human Culture", New York: Pantheon, 1998.

At every phase the human being is a totality which differs from the earlier and later stages of development in the way the three systems relate to one another and thus to the subject undergoing the development.

By and large we can say that moving, speaking and thinking are intimately bound up together in the small child; they are stimulated by the environment as it is perceived by the senses and absorbed and developed by means of imitation. As the child grows older he or she becomes increasingly capable of utilizing these three main functions independently of on another. 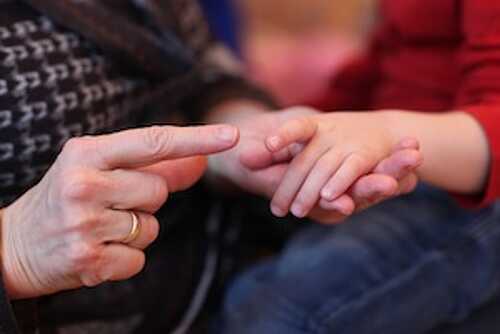