In no other country has the Waldorf movement developed as fast as in the People's Republic of China. In 2011 there was just one Waldorf school in Chengdu; three years later there were already 51 schools. Today, the movement includes over 70 schools and over 300 kindergartens. Christoph Jaffke reports here from the 2016 English Week in China.

At the moment the China Waldorf schools are still supported by a large number of mentors, mainly retired colleagues from New Zealand, Australia, the US and Europe. There are part-time courses for teachers' further education in six different cities, often with more than a hundred participants and usually running for three years.

Teaching English is a huge challenge for the schools. The country has been cut off from English speaking countries for many years. Therefore there are only a few teachers of English as a foreign language who have mastered – according to common criteria – a somewhat comprehensible pronunciation and a solid level of English. Most schools are still in the pioneering phase and can only afford to employ part-time teachers. Many schools suffer from a high level of teacher fluctuation. The required number of lessons can rarely be taught. A further difficulty arises from the fact that – unlike for class teachers – there is no specific professional education or training for Waldorf teachers of English as a foreign language.

Monica Boyd, an experienced Canadian teacher, has been travelling through China for the last five years and has been working with English teachers at various schools. She and the author have founded the „Conferences for Waldorf English Teachers“ in Guangzhou in 2012 which has attracted between fifty and seventy participants per year.

This year, the course has taken place for the fifth time and it was held for the third time in a large Buddhist temple: Tian Tai Temple, Hong An, in the Hubei province, about three hours drive from the city of Wuhan.

This was the first time that the conference was organized and hosted in cooperation with the China Waldorf Forum (CWF), a group which might be considered the pioneering body of a future Chinese Waldorf Association.

It has been important for us, right from the start, to include daily artistic practice for the teachers in the programme. This year we enjoyed English eurythmy with Claudia Fontana (USA) for the fourth year running and we did speech with Tessa Westlake. The seminars in methodology and didactics were split into three groups: Grade one to four worked with Christoph Jaffke, grade three to five with Monica Boyd and grade six to eight with Petra Eiermacher. This was also the first time that we offered a basic course for everyone: Ben Cherry, the pioneer of Waldorf education in China, introduced us to selected motives taken from The Foundations of Human Experience. Many of us returned to his thoughts again and again in their study groups.

Three evenings were reserved to practice story-telling. In this course we explored how to use our voice and body language effectively with children of various age groups. Our own practice, combined with observing others, helped to create an intensive learning atmosphere. In all the courses we laughed a lot. Many of the participants described the experience of story-telling as crucial and helpful.

In the course of the conference we tried to think of ways to establish a professional, part-time course for Waldorf English teachers. This coming spring, at the end of April 2017, Chengdu will be hosting the Asian Waldorf Teachers' Conference, this is the seventh such conference, held for the first time in The People's Republic of China. Up until then we will hopefully be a little closer to answering the question of where and with whom such a course may be established.

Prof. Dr. Christoph Jaffke was an English teacher at the Waldorf school Kräherwald in Stuttgart from 1967 to 2000. He worked twice as a visiting professor in Japan before, in 2006, co-founding the Silberwald Waldorf School in Stuttgart-Sillenbuch, where he taught until 2011. In 1975 he started publishing the series Materials for Foreign Language Teaching at Waldorf Schools. Since 1975 he has helped to train English teachers at the Seminar for Waldorf Education in Stuttgart. Today, he travels extensively in Europe, South- and Middle America and Asia as a lecturer and school counsellor.

Translated from the German by Karin Smith 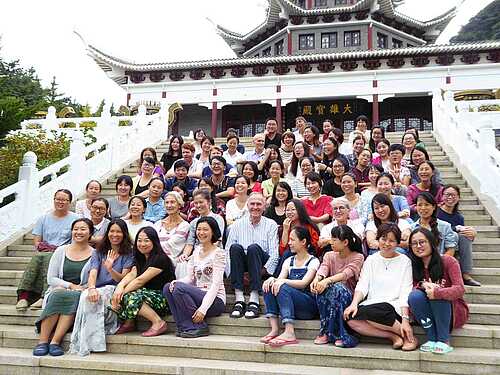