This paper explores the life and work of Emmi Pikler, one of the pioneers of Paediatrics. The author compares Pikler's and Steiner's views on child observation and education, and emphasizes their similarities.

Emmi Pikler was born in Vienna in 1902 and died 1984 in Budapest. She studied Medicine in Vienna and specialized in Paediatrics under Freiherr Clemens von Pirquet. He strongly influenced her future with his view that the most important task is to protect the child's health rather than to “focus only on the diagnosis and healing of illnesses. What matters most is not the illness but the child.” i Therefore, Pirquet was deeply concerned with questions of the child's upbringing.

One of the study modules at the Pirquet hospital was a practical training in the baby unit, studying infant care and nutrition. Her next teacher, the paediatric surgeon Hans Salzer, taught her how different a medical examination can be, if the consultant approaches the child kindly and establishes contact with the little patient. Both impulses, Pirquet's emphasis on salutogenesis as well as Salzer's empathic attitude towards the child, strongly influenced Emmi Pikler's own professional approach.

Her husband, a teacher and mathematician, shared her interest in child development and further influenced her professional progress. They decided to do everything they could to enable the healthy development of their own child. It was very important for them to respect their child, to be patient and not to restrict the free unfolding of its movements.

In 1935, Emmi Pikler started to work as a Paediatrician in Hungary and quickly earned the respect of her colleagues. She held lectures on the care and nutrition of infants and babies and, for ten years, ran her own practice as a family doctor. After the war, she cared for abandoned and malnourished children on behalf of a Hungarian organisation. This experience led her to found Lóczy, a care home for children, in 1946.

Thanks to the thorough training of the nurses and the careful consideration given to the surroundings, she managed to create a homelike atmosphere which allowed the children to grow up without the usual symptoms of neglect and hospitalism.

Emmi Pickler tirelessly studied and observed the children and out of these observations she formulated her own, highly differentiated approach to an independent development of child movement. Pikler's contributions to the upbringing of children mainly relate to:

1. Child care. In this area, she focuses on the relationship between adults and children, in which the adult carries the responsibility for positive interaction. Inner calm and presence, when caring for the child, are the basis of Pikler's Pedagogy. Every action must happen in accordance with the child and thus lead to a secure bond.

2. A second, essential point is, to allow the child to try and do everything on her own. Enough room must be given to this fundamental need of the child. Pikler's aim was, to allow free development of movement and individual rhythms.

3. A further part of her concept is the careful consideration given to the surroundings in order to create an atmosphere of security so that play and care can take place according to the age of the child.

Pikler based her pedagogical insight on a wealth of actual observations. She discovered variety and variation in child development and distanced herself from any preconceived programs and norms. She noticed that children develop according to their own inner, natural laws if the adults allow them the necessary freedom. The mindful presence of adults and their positive relationship with the children are necessary conditions for child development. They are strengthened by the language with which the carers respond to the children and comment on their actions. They don't explain, ask questions or lecture the child, but rather describe and denote the actions of the hands.

The following can be said about the relationship between Pikler's observations and insights and anthroposophical psychology:

We are grateful to Emmi Pikler for her school of infant pedagogy based on her studies and findings. Today, many open-minded teachers and researchers are interested in her ideas. Her observations, findings and practical advice is further developed and published under adverse economic circumstances by the Pikler Society in Berlin and also by her daughter Anna Tardos in Budapest where introductions and courses are held.

Claudia Grah-Wittich, was born 1957, is married to Justus Wittich and has three grown-up children. She holds an MA in Philosophy and Art History and is a qualified Social Worker. Claudia works in early childhood education and parent counselling at “hof” in Nierderursel / Frankfurt. She is also a lecturer for early childhood studies and an educational counsellor for nurseries. Furthermore, she teaches in various training centres and holds lectures and seminars on a national and international level.

Claudia is part of a group responsible for the course „Eltern beraten - Kinder Neu sehen lernen“ which starts again in November 2014.

Emmi Pikler's books are not available in English, but a selection of translated pieces can be found at The Pikler Collection.

Rudolf Steiner, The Education of the Child in the Light of Anthroposophy, Berlin, 10th January 1907 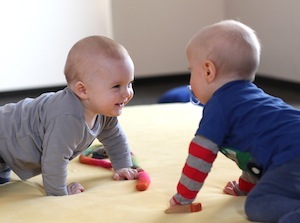