The New ‘We’ Needs Individuals

The tenth World Teachers’ and Educators’ Conference, which was held at the Goetheanum from 28 March to 1 April, attracted 850 people from 46 countries. The aim of this conference – entitled “Overcoming Resistance: Courage for an Independent Spiritual Life” – was not so much to convey contents as encourage teachers to take action in their own schools. An interview with Florian Osswald and Claus-Peter Röh...

Sebastian Jüngel: The invitation for the World Teachers’ and Educators’ Conference spoke of the growing bureaucracy in education. Was this question discussed during the conference?

Claus-Peter Röh: Our intention was to pick a moment in the multifaceted life of schools in the various countries in order to gain an impression of the conditions these schools are facing today. The question of the growing bureaucracy turned out to play a minor part during the conference. Each newly founded school does encounter resistance, however. And this resistance can strengthen our will and self-assurance. Resistance always activates the will forces.

Florian Osswald: The conference contributions showed that living fully in the present is not all that easy. We have to accept that we live in the here and now, together with the children in our care. This helps us overcome the wish that our time should be entirely different for us to be able to really embrace it. Of course, things have to change – but through resistance we can gain new prospects.

Jüngel: What kind of resistance are you referring to?

Röh: To start with, there is the basic human resistance that Goethe also deals with in ‘Faust’: as human beings we struggle with our own inner resistance. Overcoming this inner resistance can transform us. This transformation is a gradual process: something comes towards me, I begin to gain a clearer idea (of what is essential and what isn’t), then I take action (or initiative). As soon as I take action the resistance seems less threatening. One speaker at the conference used the image of the salmon that swims against the stream yet always towards the source. Nesreen Bawari, a former minister of reconstruction and development in Erbil, Kurdistan, and former minister of municipalities and public works in the Iraqi Government in Baghdad, spoke of the will forces needed to meet resistance, since without these forces there would be no water and no communal life – these forces are the most basic foundations of education. She also experienced, however, that, if one takes the initiative, help often comes from unexpected quarters: the power of initiative attracts support.

Osswald: And this shows clearly that we, as individuals, have to decide what we want. We must understand that there are situations we cannot circumnavigate and that we simply have to take the necessary steps. This makes it easier to see each school more clearly in its actual – temporal and spatial – context. This context differs from one place to another. The conference showed that diversity is good; diversity adds something to the whole.

Röh: We know this as a anthroposophical principle: spiritually speaking, I can only come closer to a question or matter if I look at it from various perspectives. We heard thoughts such as ‘I get to know myself through opposition’ – in a performance of Sha’ar laAdam – Bab Lil’Insan. Together, Yaakov Arnan, the son of a Jewish general, and Mahmoud Soubach, whose father is a Sheik, worked on an Antigone project with 23 youngsters from the Waldorf schools in Harduf and Shef-Amr. Two casts, one consisting of Arabs and one of Jews, were acting together. The tension created by their backgrounds and languages formed a new foundation for mutual understanding within their artistic activity.

Osswald: While the lectures were there to open doors, the work groups, which combined theory and artistic activity, allowed us to experience what taking action actually means. Without artistic activity we cannot become experts in the art of education. The feedback we received confirmed this. People said things like ‘You encouraged me to shape the reality’ or ‘Working artistically inspired me to put ideas into action.’

Jüngel: What is the role of courage in this?

Röh: Courage helps me to let go of old habits and be open to what lives in others. As a teacher, for instance, I will introduce a theme on the first day of a Maths main lesson, setting the course for the next lessons. When we all meet again on the following day I need courage to let go of my preparations and open myself to the questions the students bring with them after taking my introduction into the night with them.

Preparing the ground for threefoldness

Jüngel: The subtitle “Courage for an independent spiritual life” seems to refer to the threefold social organism.

Osswald: It was our intention to raise greater awareness for the social threefolding idea, because schools have a social task.

Röh: Daniele Ganser, the Swiss historian and energy and peace expert, encouraged his listeners to look for the truth, not in a hurry but each in their individual way, because it will enable them to form their own judgments.

Jüngel: Was there anything that touched you personally during this the conference?

Röh: The fact that, in an African school, children of six or seven different language or religious backgrounds share the same classroom. The ‘I’ simply has to learn to listen to the other, to not place itself at the centre but to mediate. This opens up new possibilities. What I also found moving was that people from countries which are at war with one another came to the Goetheanum to meet in peace and discuss questions of education.

Osswald: I was impressed that – when one focused on a topic – it first looked as if everyone had more or less the same views on it. If one took more time, however, one realized that there was a vast variety of opinions.I also realized how little we take the local situations into account. The “form” of Waldorf education must grow much more from the various locations. We should not say things like ‘This is how it is done’; and we should stop holding on to traditions. What also impressed me was that everyone was able to speak in their own way: how much time do people need to come to the point? If the listeners are impatient the speaker cannot unfold and nothing new can grow. Some speak clearly, others beautifully, and others often pause. How differently we speak about things!

Röh: I felt I could experience the ‘I’ even of people who spoke in another language. For me this was a practical exercise in what Rudolf Steiner presented in his lecture of 15 April 1924 (GA 309), “A person’s inner nature can be experienced from the way they form words. […] If we understand language in this subtle way, we see how the ‘I’ organization works.” We will be less with our own ‘I’ in the future and more with what is going on around us and in other people.

Jüngel: Was there a golden thread that ran through the whole conference?

Osswald: I felt that Viktor Frankl was very much present – and with him the question of existence.

Röh: Having survived the war and the concentration camp, the fundamental question was for him, “What does the world ask of me now?” Osswald: Taking action was another prominent theme. Bodo von Plato mentioned Steiner’s words, “I love the action.” It is not only important that we do things, but that we love what we are doing. When I am alone I am forced to develop – energy is created. When there is another, we need the courage to become active together. And when there are more people we have the task of forming a community. The question of the “We” arises.

Osswald: The ‘We’ needs individuals. Diversity alone does not create this ‘We’. Being part of a group is the old kind of ‘We’ that no longer carries: “We, the Waldorf teachers…” One never knows in advance whether one will be able to form a ‘We’. If one is not careful one forms a ‘We’ without an ‘I’ – and that would be disastrous.

Röh: The new ‘We’ will be formed with others and by working with others. Unlike the old ‘We’ the new ‘We’ does not simply appear.

Osswald: The ‘I’ will only enter when there is a new ‘We’. And that will provide orientation. Steiner said it clearly, “In human evolution we have no right to feel that we are individualities if we do not also feel that we are a part of humanity” (GA 305, Lecture of 29 August 1922). It is from this relationship with the ‘We’ that the ‘I’ will take its orientation today.

Röh: Development is not possible without others, without resistance and without a clear understanding of one’s own position. People who wish to found a kindergarten or school need the courage to acknowledge their identity and the courage to form a community. 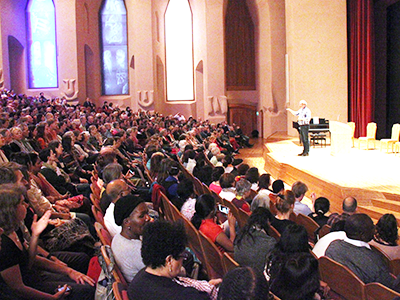 Identity and community: without others there is no development