Are You Living Your Talk?

Waldorf teachers in China need to balance a „copy-paste“ approach to foreign cultural elements with the search for their own path in order to create their own identity in modern China. We spoke to Ben Cherry, coordinator of the China Waldorf Forum and teacher trainer, about the latest developments in Chinese Waldorf education.

Do the teachers in China follow the so-called “Richter Lehrplan” and if so, how do they adapt it to the Chinese context?

Ben Cherry: I would say speaking generally - because they are all new teachers - they need something to copy the first time and then, when they have a bit of experience, they start to experiment within their own context. There is a strong wish amongst the teachers to rediscover the treasures of Chinese culture. There is a whole area of current research about when to bring what in what way.

What can “Chinese culture” mean?

Ben: It includes stories, aspects of history, literature, philosophy and of course calligraphy and the Chinese arts. The schools have different attitudes. Some want to replace everything, but that is not the general attitude the China Waldorf Forum encourages. It is more to rediscover Chinese sources and also really try to understand what has already been developed in Waldorf education. In other words, to learn more and more about the development and processes of children and how children learn. Because otherwise it is just a kind copy and paste thing. It is not a sustainable way and it is not productive if a school says it doesn't like Norse mythology and therefore replaces it with any randomly chosen Chinese story.

Are there any examples?

Already in grade one there is the question of what kind of folk tales or fairy tales to tell the children. You see, there have been several cultural revolutions in Chinese history, not only in the last century. 2000 years ago there was a massive cultural revolution and many ancient resources were simply eliminated. Even though there is a wealth in Chinese culture, there are also in some ways huge gaps. If teachers really feel it must be something Chinese, then they tend to grasp any ancient Chinese story. And it is not necessarily something that would nourish a class 1 or class 2 child.

What are the main challenges in teacher education?

The biggest challenge in teacher education is that one has to find a balance between the urgent needs - because many teachers who are in the teacher training are already teaching - and the real intentions of the teacher training program which is to build foundations for the future, so that the new teachers can become more and more autonomous. If they understand what they are doing and why they are doing it, then they can make their own decisions. So, one challenge is the speed and the other one is the huge number of students. For example in South China in the teacher-training course there are around 180 people.

And how many schools are there?

It depends what you mean by schools. But there are more than 60 initiatives working with Waldorf education that we know of. There are around 400 Kindergartens, but no one really knows. As I am speaking to you, probably one is opening somewhere. It is this whole spirit in China at the moment of just jumping in. One has to remember that Waldorf education only started there in 2004 when the first Waldorf School was founded.

What challenges will come with the introduction of upper schools in China?

Well, it’s the next step. The Chengdu School is already up to grade 10. Beijing and Guangzhou in the South East are up to grade 8. They are at this pivotal point; they are asking themselves whether they can go on or not. So what we are encouraging the schools in Guangzhou and Beijing to do is to work together to create with our help a single high school rather than having their own high school.

How is the calligraphy introduced to the children?

The teachers with the most experience are in Taiwan. The biggest Waldorf School in Taiwan is Ci Xin. In the last 16 years of experience they have learned that in grades 1, 2 and 3 the calligraphy is more like an extension of painting. So they paint Chinese characters in colour. In Ci Xin calligraphy as such begins in grade 4. And form drawing is a wonderful preparation for Chinese characters, because clearly every character is a combination of straight and curved lines. Many teachers also work from the evolution of the character because the earlier forms are more alive and pictorial than the present ones.

It is acknowledged, even by the central government, that mainstream education is not working well. So there is something about the Chinese people that is really hungry for what is new, but they want it to be connected with their own culture. Most of the parents are from the new middle class, so now they have more time and want to find out about education. Many Waldorf schools began as Montessori kindergartens and then, when people started to hear about Waldorf, they changed to that. This is because they recognise that Waldorf education is based on trying to understand children in detail.

It is really taking hold of society at many different levels. A friend of mine recently spoke to a professor of education at a conference and when she said that she was connected with the Chengdu Waldorf school, this professor said that anyone in China now who really wants to bring innovation into education cannot ignore Waldorf education. He said, you have to face this fact. It is an extraordinary situation.

Are there any differences in school management you can make out between the West and China?

This is a big question. We will have a conference next year, which is about “I and the group”. One of the themes in that will be the process of the “I” incarnating through childhood and finding its path through life. We will have discussions, forums and other things as part of this conference. We will be looking at how we perceive the differences between East and West. For example I would say the “I” is more strongly incarnated in Western bodies and a little bit more lightly incarnated in Eastern bodies. I have heard from so many eurythmists who come to the East, that they are astonished at how quickly a group forms, how quickly people are able to tune in to what the others are doing.

Now this doesn’t necessarily reflect in quite the same harmonious way at all when it comes to school management. One of the central roles of the China Waldorf Forum is to enhance quality and protect this education. But we are not able to do this unless we encourage people to work together and show them some ways to do so. The tendency in the early years and with many new schools has been that people feel “it is my venture and I am doing it my way”. You can see how the individuality has grown in the last 30 years since China opened up to the world. People have a longing to find their own way.

How do the teachers work with self-development?

It is so deeply part of their culture to go through practices of self-development. Some of the teachers are Buddhist, some are more connected with Daoism or Confucianism. Many, of course, have no religion, but they are open to spiritual development. Things like the six basic exercises overlap very much with Buddhist practice. The Chinese are curious to see whether we “foreigners” have the will to put into action what we are preaching. There is such an influence of Tai Chi and Kung Fu, it is a movement country. Every evening there are people on the streets, dancing. And so they look at us “westerners” and they think, “So you are working with anthroposophy, how does this affect your health? Are you well? Are you disciplined? Are you living your talk?”

How is the word “I” used in the Chinese language? And what about family members?

In some Chinese-based languages, like Vietnamese, for example, almost all pronouns are family pronouns. In this conversation I would probably call you niece and you would call me uncle. In Mandarin, there are more abstract words for I and you and a single word for he, she or it, but still family pronouns can be used as a way of honouring a closer relationship. For example, many of the people in the China Waldorf movement call me grandfather. Ben Yéyé or rather Bèn Yéyé, which means stupid. Stupid grandfather. I like it.
Actually, they have two words for I. One is very common, wŏ. In the translation of Steiner’s works, when he uses the expression “das Ich”, it is usually translated with an ancient word “wu”, which can only be used as a subject, never an object.

Thank you so much for the interview and the wonderful insight!

China has somehow been part of Ben's life since early childhood, first in the deep blue dragon paintings on his grandmother's crockery in Scotland and in the persuasion of the adults around him to finish eating what was in his bowl by thinking 'of all the people starving in China', then in the chant of 'Chinky, Chinky Chinaman' which followed him at kindergarten, presumably because of the slight slant of his eyes, and at last in the strange words 'Confucius, he say....' followed by a non-sensical sentence, carved by some brave and naughty boy into the wooden walls of those horrible toilets at boarding school in England... In 1970, age 22, we see him standing on the Hong Kong side of the border with China, wondering if he would ever cross that impressive frontier of cement and barbed wire, not knowing that 24 years later, after traveling and working in many other parts of the world, and after becoming engrossed in the Yi Ching and other writings from Ancient China, especially the poetry of Chuang Tzu, as well as finally encountering the work of Rudolf Steiner at the age of 30 and teaching for many years in a Waldorf school in Australia, he would finally make it there, and that by 2016 he would be spending nine months of each year helping the rapidly growing Waldorf school movement both in Mainland China and Taiwan… So, a dream comes true, but of course never quite in the way it was dreamt. 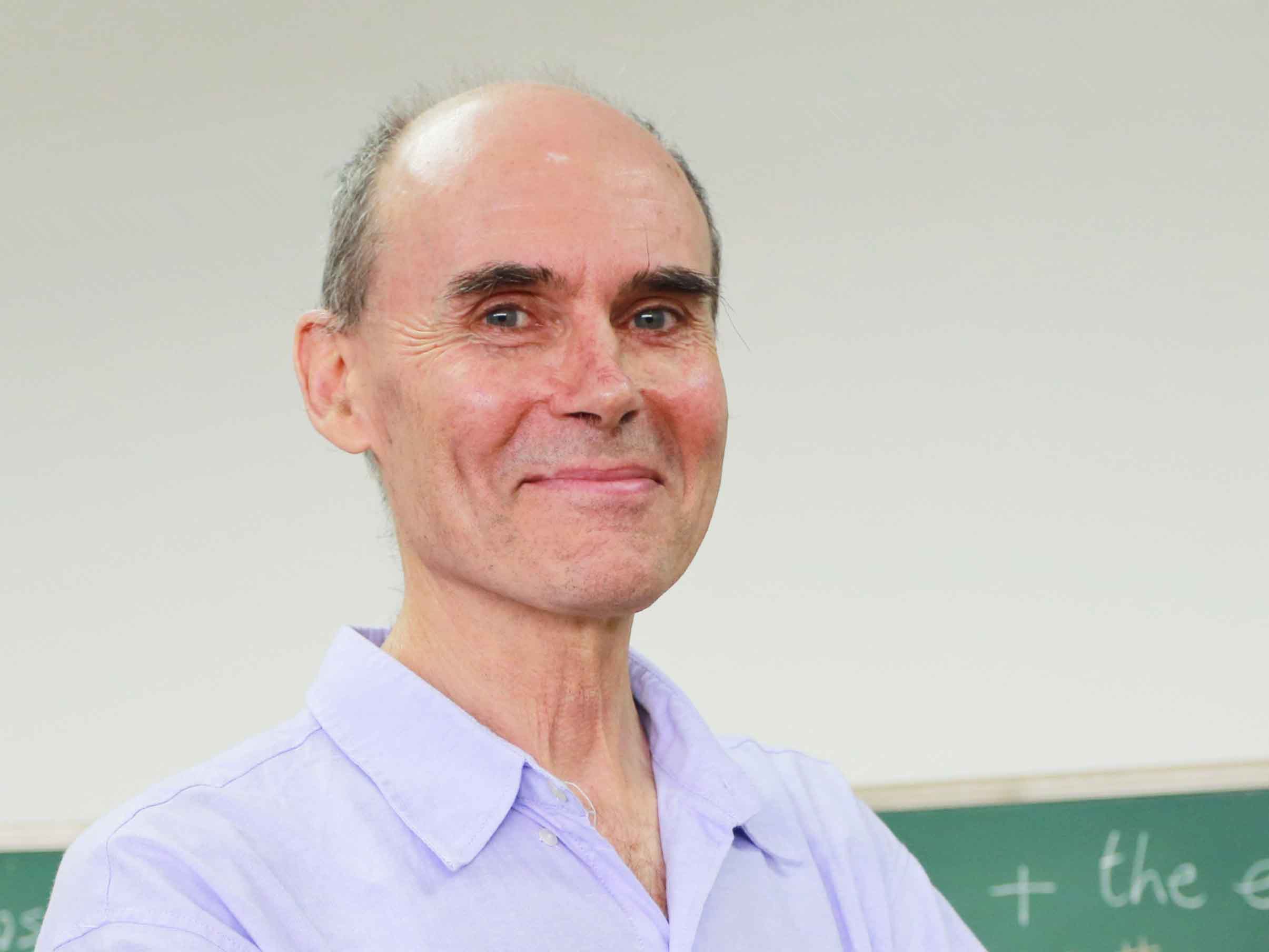