Between Coca and Noodles

This is the second part of an article about the creation of festivals at Waldorf schools. Here, the author refers to an example from Peru. In an ethnographic study as part of her master thesis at the Rudolf Steiner University College Oslo, Vera Hoffmann investigated the processes of developing new ideas for what used to be eurocentered Waldorf festivals. The Peruvian school Kusi Kawsay uses old traditions, with the aim of guiding young people to free independent thinking.

Kusi Kawsay is a small Waldorf school in Pisac, Peru, in the Sacred Valley of the Incas. Most of the mostly indigenous school families live in poverty. The school was founded by a group of educated and self-confident indigenous people. They had been looking for a school system for their children which promotes their own cultural roots and their individual self-confidence, as well as free thinking. Even in today's Peruvian society, a subtle but harmful racism towards indigenous people is often dominant and can result in violence in public schools.

It was a central concern for the school´s founders to include the Andean cosmovision into the Waldorf curriculum. In this context, the question arose as to whether it would be appropriate to celebrate the Christian European festival of St. Martin in completely different cultural and climatic conditions. The negative history of the indigenous population with the Catholic Church added an additional weight to this question.

The ancient indigenous culture of festivals and rituals reflects a respectful connection of human beings with all visible and invisible beings of nature. "Ayni," here only inadequately translated as "reciprocity," is the basic attitude towards the animated nature in which, for example, also places and mountains, including the local invisible beings, are given individual names and even gifts.

Consequently, the school revived the ancient cycle of festivals, which was oriented in the solar calendar and the agricultural seasonal rhythm, with the aim of restoring the ancestors´ substantial relationship with nature, while at the same time leading the students to free thinking and autonomous self-consciousness. The school´s teaching blocks were also reconciled with this ritual cycle.

As an example, I would like to describe some details of the ritual of the "gifts to Mother Earth" which I witnessed in Kusi Kawsay.

It is early August and winter in the Andes. The earth lies fallow and is experienced as needy and weak. The students gather around the central square, an area similar to a small amphitheatre with stone stairs. In the center of the place on the ground sits a wise old man dressed in indigenous costume, as a sort of ceremonial master. He performs a multi-part ceremony on a ritual blanket, building a kind of mandala from coca leaves (an Andean medicinal plant), seeds, fruit, flowers, dyes, threads and also noodles, even photocopied banknotes and glittery plastic stars as an image of the starry sky.

Previously, the blanket and three coca leaves had been passed around the students and teachers and had been provided with three good wishes for Mother Earth and the school. At the end of the ritual the blanket is ceremonially folded and tied. The wise old man takes it to a holy place in the mountains where it is burned. In this last part of the ritual the gifts and wishes can have a healing effect on "Allpa Mama" (Mother Earth) in a twofold way: as smoke they connect with the “breath of the earth” - the air, and as ashes they connect with the earth's physical body.

An overview of annual festivals

Pukllay (Quechua for Game) is the most joyful festival of the Andine festive cycle. It is the festival of fertility and abundance, of love and joy of life. It is celebrated for several days with dance, music and traditional costume in the rainy season (January - March) when nature begins to flower again after the dry season.

Cosecha (harvest) is celebrated in autumn, when the rainy season comes to an end and the children harvest their small fields. Working on the chakras (fields) is essential in the Andean society and in the traditional education of the children, even the nursery children have their chakritas (small fields) and participate in these celebrations.

Chakana (Cross of the South) is celebrated in May. The night sky was of special significance to the people of the Andes before the arrival of media. The "Cross of the South" was particularly revered. Originally, the festival was dedicated to this constellation. The adults of Kusi Kawsay celebrate it in the original sense with a nightly hike into the mountains. In the school, it is celebrated on the 3rd of May with a joint observation of the stars and a night festival.

Inti Raimy (Winter Solstice) is the largest festival of the Andean cycle. It is celebrated for several days between 19 and 23 June. Indigenous guests from other countries are invited. It is a festival with ritual dances and with a big fire devoted to the sun which in winter is experienced as small and needy. In the sense of "Ayni" (reciprocity), thus new strength is given to the sun, so that in spring it will be able to again offer its strength to the earth. Inti Raimy is also the beginning of the new year for the Andean people.

Ofrenda a la Allpa Mama (gifts to Mother Earth) This is the previously described festival in August (winter). In anticipation of the approaching new fertility cycle, people now offer their wishes and gifts to the earth in gratefulness. `Ayni' in this case is directed towards the earth. Ofrenda a la Allpa Mama is a rather quiet and introvert celebration.

Tarpuy (sowing) is a sowing festival in September, just before the rainy season. On the first day the earth is watered, on the second day it is dug and on the third day fertilized. For the ensuing celebration guests come down from the higher Andean villages and bless the children's seeds. Then each time three seeds are put into the earth together: one for drying, one for decay and one for growing.

Los Machulas (The Ancients) is a feast in November, where direct as well as mythological ancestors are revered. One teacher says: "In the Andes, the dead are alive. During these days, they come out of the earth to share life with us." For that, the adults go into the mountains and dance with ritual masks. A teacher talks about the mythology related to the ancestors: "The first giant primitive men lived only in the light of the moon. One day, the sun came out and everyone became blind and escaped into the earth. Later, the second, smaller people appeared from these earth holes. The first people, who had disappeared into the depths of the earth, enlivened from there the plants, the lakes, the mountains ... everything. For this reason, everything is alive ... can hear ... feel sad or happy."

The school founders have a clear picture of how indigenous children can be led to modern self-confidence, autonomy and free thinking. One founder expressed that the agricultural solar calendar calls for exact observation of natural phenomena, and therefore allows the pupils to look at what is real. Another founder listed dignified education and the guidance towards self-consciousness as important Waldorf educational features within the oppressed indigenous society. Interestingly enough next to "ayni", the concept of "pachankiri", which means being an independent human, is also present in the Andean cosmovision.

Is the Waldorf movement open towards indigenous traditions? Can we counteract colonial tendencies within the Waldorf movement? A teacher of Kusi Kawsay described the school´s founder: "X showed us the fish, but X did not teach us the process of fishing." For me, the quote lies at the heart of the issue: it is not sufficient to convey Waldorf educational methodology or content. It is crucial to simultaneously work with the local teachers on adapting form and content to the local culture and environment.

It took the local teachers in Kusi Kawsay much courage to free themselves from the given Waldorf traditions and to search independently in their own natural and cultural environment. Rudolf Steiner has also emphasized the importance of the local environment for the child. I believe it will continue to be a challenge for those involved in the international Waldorf schools to select the appropriate criteria in every school and culture. 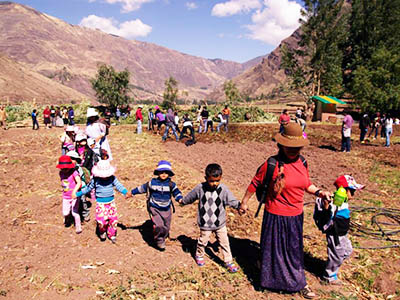