Sport, movement, exercise and active leisure pursuits are central to our culture and enormous amounts of time, money and creative endeavour are poured into them. But why are so many people drawn to engage in movement activities? Even those who don’t take part are often interested as spectators. The sport and active leisure industry worldwide ranks alongside the arms, oil and automotive industries in terms of annual turnover.

To play, exercise and move can give a deep satisfaction. We feel freer and yet more engaged in the world. It is interesting to discover that all languages are full of metaphorical references to movement and direction. I think there is a direct link between our mind or inner world and the outer world of space around us. For instance, if I ask you for a straight answer, you know that I am asking for an honest or truthful reply but I use a quality of space (straight) to describe it. A criminal is a ‘crook’ (crooked) and a politician’s ‘spin’ circumvents straightness and truth. A ‘bent’ copper is a dishonest policeman. Decision-making requires a balance of pros and cons, we want to avoid a ‘one-sided’ decision. The ‘scales’ of justice weigh up differing opinions to come to a ‘balanced ‘judgement. The list of metaphors is endless.

This phenomenon is not peculiar to a particular culture, it is in all languages, it is universally human. The space around us has ‘quality’ and we use descriptions of this quality to enhance verbal and written communication.

Furthermore, the way we use space, how we stand, sit, move and gesture, all can in themselves be forms of communication. When we are happy, we are ‘lifted’, we feel ‘up’ and perhaps 'jump for joy'. When we are sad, we feel ‘down’ or ‘heavy’. In the ubiquitous symbol of the smiley face, the upward or downward curve of the lips is sufficient to instantly convey happiness or sadness, approval or disapproval respectively. In many languages the same word is used for difficult and heavy, for example in the German “schwer” und “schwierig”. Feelings of 'triumph and disaster' are inextricably linked with the 'upward and downward' directions in space. Between the two lies a 'calm horizontal'. It is no accident that a view over a landscape with a distant, flat horizon brings feelings of peace and contentment. Part of the attraction of a seaside holiday lies in the relaxing expanse of the ocean’s horizon. How different is our feeling in the drama of a mountain landscape which, with its 'ups and downs', is likely to have a more stimulating or tonic effect. The horizontal plane is one where our feelings of equality and equanimity are accentuated. The plane of a conference table is one around which politicians or negotiators will gather; the table of King Arthur or that of the Last Supper are powerful symbols of a shared humanity. An arbitrator who commands 'widespread' respect is one who is 'even-handed and level-headed'. Then, when the moment of decision comes, it is the up/down plane that we refer to: the halls of judgement tend to have tall, straight pillars, the judge’s clothes will often emphasize uprightness and his gavel will come down as if to highlight the fact that he has come 'down' on one 'side' of the argument.

Even in our experience of time, another dimension, we tend to convey to each other in spatial terms. We look 'forward' or ahead to the future, 'back' to the past and experience the 'present' here between them. A process in time can be described in ‘steps’ for instance in an instruction manual, "Step 1: Take the two screws from the packet and place them in the holes provided". Step 2: Now take the wooden…..etc. We also ‘walk through’ an activity or process we are describing to others.

When we move we are in constant play with the forces and meaning of the space around us. We express ourselves through movement, but we can also change how we feel inwardly through moving differently. We all know the satisfaction we feel after appropriate exercise or the neat execution of a new found skill such as the 'true' flight of the arrow that hits the centre of the target, the team-mates who know each other so well that they are able to make a series of brilliant passes out of their 'understanding for each other' or the beautiful 'timing' of the backhand volley or somersault. So not only do we express something of our inward being when we move but we change ourselves and this could be the root of the world's passion for 'recreation' (re-creation).

From this study of space and movement comes a collection of simple core exercises called Bothmer Gymnastics, which, when practiced regularly, bring about a change of inner and outer posture and movement. These movement forms originated in Europe in the 1920s and have undergone a renaissance of use in the last 30 years. The methods are applied in schools, adult education, curative education and physiotherapy.

The possibilities arising from this work are huge and a growing number of people benefit from this very stimulating and significant body of work. 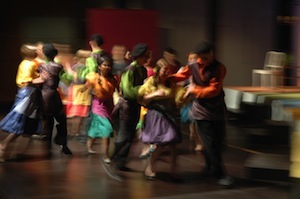