How can youngsters discover their personal identity once puberty is over? They can be helped by undertaking independent projects as well as by embarking on periods of practical work in agriculture or in social or commercial situations which allow them to grasp wider contexts and experience social interaction.

Their Self develops through experiencing "you" and the world. Scientific and cultural questions promote orientation in their search for their own set of values. What they learn in the upper school builds basically on what they learnt in the lower and middle school as they delve more deeply into the subject matter through a questioning attitude with an increasingly scientific slant. Independent of national requirements, many Waldorf Schools run their own school-leaving examinations in the form of collaborative artistic schemes and individual graduation projects. These testify to the pupils' ability to work responsibly on a self-chosen theme and present it appropriately within a prescribed period of time.

In this sense, education at Waldorf Schools seeks to help growing youngsters in ways that are in keeping with their own developmental needs. During the pre-school period the emphasis is on developing the senses and providing play that is appropriate for the development both of the body and of the imagination. The primary and middle school years focus on stimulating individual learning and the formation of an inner treasure-house of experience and memory. And for youngsters after puberty the main emphasis is on the comprehension of wider contexts and the development of individual, social and specialist competence. Expressed simply this could be described both in detail and more widely as leading from "doing" via "experiencing" to "knowing".

The guiding principle of Waldorf Education is the conviction that children's learning and development is underpinned by two factors: on the one hand the will to learn which they bring with them and which arises out of their very being, and on the other the stimulus they receive from their human environment which gives direction to that will to learn. No human being will ever achieve uprightness unless stimulated to do so through being surrounded by others who are upright in their standing and walking; and no human being growing up in an environment where language is not heard will ever learn to speak. Meanwhile, as children grow up changes come about in the way they relate to following an example on the one hand and having the will to learn on the other. In early childhood their very existence consists in looking up to the adult world and being stimulated by it; then, as school-children, they look for a psychological example to follow while as young adults they base their actions on spiritual and cultural values. More than on anything else, all this is founded on the urge to apply their own energies to fulfilling their potential or, one might say, to becoming "who they are". 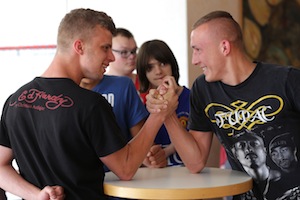