The principal conclusion to be drawn from the anthroposophical view of human development is that all the realms need to be cultivated in ways that are suitable for the age of the children. This is expressed firstly in the wide range of subjects taught at Waldorf Schools.

Movement subjects such as gym, PE and eurythmy (the movement art inaugurated by Rudolf Steiner), handwork, gardening and crafts, painting, music and choral speaking are as much a part of the timetable as maths and foreign languages. Taking the process of emancipation into account, it becomes obvious that children making meaningful use of their hands and arms and their movement potential as a whole are also creating the basis for a differentiated use of language and a differentiated capacity to form judgements. For all ages the question to be asked is: How can we arrange our lessons to enable children to initiate their own activity in the realm they are "at" in terms of individual capability and development. This question derives from our fundamental attitude of taking them seriously as unique beings who bear within them the potential to determine their own path later on regardless of the stage they may have reached. 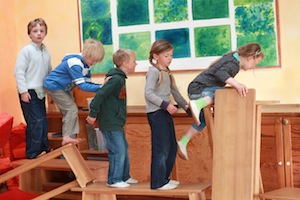