Pure Violet, Fire Mushroom, and a Test of Courage

The teaching of chemistry at Steiner Waldorf Schools is something unique. Swiss Chemistry teacher, Thomas Loosli, introduces this special approach with some quotes and experiments.

Eckermann said about Goethe: “Goethe was fascinated by iodine; he spoke with amazement about it, as if new discoveries in Chemistry surprised him. He had some iodine brought to him and made it evaporate on the flame of a wax candle before our very eyes.”1

EXPERIMENT 1: Put a few crystals of iodine into a fireproof test tube and heat it over a candle flame. Pupils can do this easily in the classroom, in groups of four.

Observation: Gases of an intensive violet colour rise out of the test tube; some dark glittering crystals appear on the inside of the tube. (The word “iodine” is from the Greek, meaning violet or purple)

The adolescents are engaged in the experiments, watch closely and collect observations. It is important to stay long enough with the phenomena to accord the experiment its full impact and allow the substances to “begin to speak”. The foundation of our chemistry teaching is the understanding through the senses. We may call it the phenomenological approach. The adolescents describe their observations in pictures and texts; this is an interesting area of practice!

“When the exams, assignments, and reports were completed, the interest in chemistry was exhausted. So, Doctor Marotzke started a few experiments. He produced some bangs and colourful vapours, but he did it only to fill the lesson. Then, he dictated the text to be revised for next week.”

From “Buddenbrooks” by Thomas Mann

EXPERIMENT 2: Put 1-2 cm candle wax shavings into a non-fireproof test tube and heat it up until it boils intensively. Now submerge the test tube in water inside a plastic beaker.

SAFETY: The teacher demonstrates the experiment in the fume hood which is lined with newspaper. Please use safety goggles and gloves.

OBSERVATION: Smoke rises and burns as an orange ball of fire.

The adolescents observe the spectacular experiment and see the powerful forces which are hidden even in a small amount of candle wax. Everyday substances teach us to marvel. Once more, we take the phenomenological approach and describe the observations in detail. This means that the experiment deserves close attention and wants to be taken seriously.

Goethe: “Therefore we cannot be too careful, not to draw premature conclusions from an experiment. It is precisely in passing from experience to judgement, or from a piece of knowledge to its application, that all the inner enemies of man wont to lie in wait, as in a mountain defile: uncontrolled imagination, impatience, precociousness...”2

Of course, the adolescent learner wants to discover the laws behind the phenomena. It is the teacher's task to accompany this process in a way which is appropriate to the student's age and developmental stage. We want to avoid the methods of Doctor Marotzke. The central element in chemistry teaching is the bridge between the phenomenon and the interpretation. Ideally, the student discovers this bridge on their own.

Rudolf Steiner: “Reality is neither the perception of a phenomenon nor the abstract idea. The underlying law and the phenomena are reality.”3

A Test of Courage

“A teacher in Gambia collects poems for science teaching. Here is one of them: “The world is full of a thousand things. We could be as happy as kings.” With time, the children see all those marvels diminish. The lies of the king's old clothes are gently debunked. Now, we only find varying quantities of protons, electrons and neutrons in in the king's treasure chest.”

Observation: Bubbles rise up, translucent swirls appear, the total volume is 97ml, and the mixture starts to warm up.

Additional Experiment: Dip your finger into the solution and light it on a candle flame.

SAFETY: Only use the alcohol-water mixture. Pure alcohol causes burns. In the dark, the experiment is very attractive.

The concepts of particles and models are only introduced towards the end of High School. However, the transition from Steiner Waldorf school to further education in mainstream schooling has to be carefully prepared.

Steiner Waldorf school chemistry puts the phenomena at its centre, and rightly so. By the end of their schooling, the young people will have been introduced to many areas of learning. They will have gained experience in dealing with chemicals and equipment; they will be careful observers; they will ask the crucial questions and document the findings in their own words. The insights and findings will vary from one student to the next depending on the individual's abilities. The adolescents will become aware of the fact that the material world remains a mystery. Rudolf Steiner calls it “the highest hierarchy.”

I would like to end – in phenomenological tradition – with interpretations of the experiments.

EXPERIMENT 1: Iodine changes from a solid substance directly into vapour; it sublimes. The gases change directly into crystals in the cool part of the test tube – again, iodine misses out on the liquid state.

EXPERIMENT 2: The temperature shock causes cracks in the glass. Water enters through the cracks and evaporates explosively. The fast increase in volume at the evaporation point causes the liquid wax to form tiny droplets. These droplets are in a highly volatile state and combust spontaneously.

EXPERIMENT 3: The mixing of liquids of varying density causes translucent swirls. Trapped air is driven out of the water and the total volume is now 97ml.

Additional Experiment: The latent heat in the water cools the finger during the burning process.

1Conversations of Goethe with Johann Peter Eckermann, published in 1930 and 1998 by Da Capo Press.

Thomas Loosli, Dr. phil.nat., was born in 1960. He was a pupil at Rudolf Steiner School; then studied chemistry at the University of Berne, Switzerland. He taught chemistry at Rudolf Steiner School Bern and Ittigen from 1992 to 2010. He has been a teacher at Gymnasium Köniz since 1998, and a lecturer for didactics at Pädagogische Hochschule Nordwestschweiz since 2009. 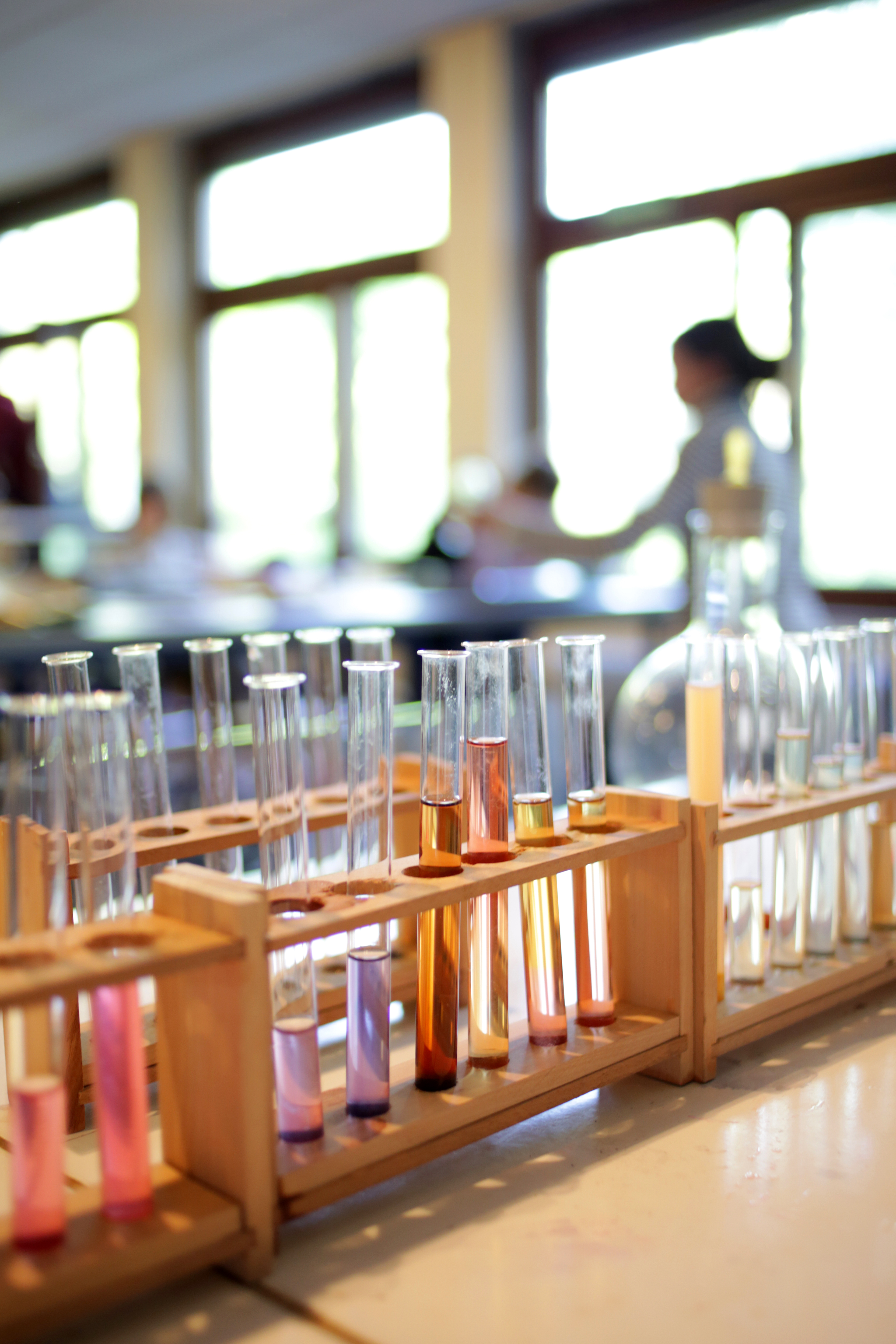