The teaching of physics in Waldorf education has a phenomenological approach. This raises specific methodological and epistemological questions. Here you will find the article "Teaching Physics Phenomenologically" by Wilfried Sommer from 2019.

Phenomenology as a method for teaching physics in main lesson blocks

Since the opening of the first Waldorf School in 1919 phenomenological approaches have been an important focus in teaching physics. We can discover in them many connections to an exemplary approach as has been described for example by Klafki and Wagenschein. (1)

Phenomenological teaching methods are to be found not only in physics classes but play a role throughout science and humanity classes in Waldorf Education. They can be seen as a specific variation of the notion of the exemplary in learning with a unique three-step structure. Further discussion of this relationship is to be found in an overview of general didactics in articles of the online journal Research on Steiner Education. (1) (2) These articles will be especially helpful for those readers who are interested in better understanding the anthropological aspects of the main lesson approach.

The concept “phenomenological” calls attention to the fact that those phenomena and series of phenomena that have the potential of revealing a universal contained in a particular become the center of the learning process in the lessons. It is a programmatic use of the term that captures verbally the specific nature of the main lesson block approach.

Phenomenology as a method for developing understanding in physics
Phenomenological approaches have a long tradition in the teaching of the sciences. A good overview of the origins and development of such approaches is to be found in Doing phenomenology in science education: a research review by Østergaard, Dahlin and Hugo. (3) The authors draw attention among other things to the gap students can experience between the direct, sensual, embodied perception of a natural phenomenon and the concepts that are used to explain it. Their discussion focuses on whether doing phenomenology – as a structured approach to developing understanding – can bridge this gap.

Fuchs (4) views the gap as inherent in modern science when in a reductionist approach the “original lifeworld experience” is broken down into a “physical quantitative” and a “subjective qualitative component”. In scientific practice, constructs, generalized as explanations that can be quantified, establish themselves as what is considered to be “actually” real. They are viewed as the causal factors of what we experience in the life world. Our perception of the sunlit world is seen as “just” the emission of light rays, their reflection by various objects and their coming into contact with our eyes; warmth as “just” the movement of atoms; solid matter “just” a different configuration of atoms than gaseous matter.

Instead of feeling connected with and imbedded in nature, a sense of isolation and foreignness can arise. We are taught to believe that the qualitative life world experience is “just” a subjective addendum to what is “actually” real.

Weizsäcker (5) termed the view that a world “in itself” exists behind the appearances, a world of objects with the capacity to bring forth the appearances (for instance light rays that bring forth brightness), metaphysical realism. In his opinion, metaphysical realism is not a scientific thesis but a specific world view. “Metaphysical realism maintains the existence of a real world behind the sense impressions.” This is “neither to be proven nor refuted” as the only viable basis for proof is “experience, which cannot be accepted as proof”. (5)

Even though scientific models in physics are no doubt seldom consciously formulated as the philosophical expression of metaphysical realism, Weizsäcker’s pointed remarks show that an epistemic approach that tends in the direction of metaphysical realism must create a gulf between experience and conceptualization. This is especially true due to the role assigned experience.

For example: When we look into a mirror, we see a spatially ordered mirror world whose objects appear perpendicular to those in front of the mirror. (6) If this spatial relationship is considered to be “just because” the light rays are reflected in the mirror with the angle of incidence being equal to the angle of reflection, we may hear in this explanation the epistemic conviction: The light rays are what is actually important and, at an emotional level, considered to be “real”. The logical conclusion of the reflection agrees with what necessarily appears as a well-ordered mirrored world. Therefore, light “must” consist of light rays that are reflected in the manner described.

From a constructivist perspective, this way of developing a concept is viable, yet makes no ontological pretense. In educational practice, however, we experience students speaking about the scientific models as though they have ontological validity: atoms are placed “on the same level of realness as cars and books”. Students have difficulty recognizing the hypothetical nature of the model. (7)

A phenomenological approach goes about developing understanding in physics differently. Method is to a great extent determined by the phenomena themselves in the context of how they come to appearance. In a first step, we face the challenge of verifying the phenomena. We do this with as much precision and from as many sides as possible within the context in which they appear. In Wagenschein’s (8) terminology, at the beginning of an exploration the things are allowed to speak for themselves, to express themselves in their own way. The way things bring themselves to appearance serves to guide us. By attending to the appearances, we are able to discover qualities of relatedness essential to the phenomena.

In a second step, the conditions or determining factors are examined more closely. Significant aspects are brought into the foreground through experimental sequences and the phenomena are ordered within the framework of what we have recognized to be necessary conditions. In this process, elements and aspects relatedness essential to the phenomena come also to appearance. These can be described in their interrelatedness or placed in a systematic order that reflects the array of the experienced phenomena.

In physics, an emergent understanding that begins with the ordering of a series of related phenomena avoids the formation of hypotheses that ignore the manner of the phenomena’s appearing and, for instance, posit physical magnitudes existing behind the appearances. Such an understanding approaches the coming into appearance of the phenomena questioningly. Hypotheses are only formed to help sort through the concrete multiplicity of expression in search of the conditions that make the appearing possible. Causal relationships are recognized as necessary conditions; structural causality, which forms the basis of visualized models, is avoided. This allows us to free the experiment from having to demonstrate proof of a conceptual model and leaves us free to discover the interwoven conditions in the actuality of what we encounter.

“But the real glory of science is that we can find a way of thinking such that the law is evident” wrote Richard Feynman. (9) From a phenomenological perspective we could interpret this as saying that gaining knowledge in physics by bringing a series of phenomena into a meaningful order is only possible if we can find the ordering principles that illuminate the single phenomenon in the array of the phenomena itself.

Inherent in this approach is a different quality of closeness to natural. It is important to practice being attentive to what we experience through the senses, it is important to learn to enjoy the manifold coming into appearance of the phenomenal world, to learn to portray the phenomena and only proceed to conceptualization when we acquired an abundance of perceptions and experiences. Physics is approached as a natural science, not merely a laboratory science (10), descriptive method is placed in the foreground (11) and scientific understanding is developed out of what can be experienced in the immediate surroundings (12).

Prof. Dr. Wilfried Sommer, born in 1967, studied physics in Stuttgart/ Germany and completed a doctorate in the didactics of physics with the topic "On the phenomenological description of diffraction in the concept of optical paths" at the Johann Wolfgang Goethe University in Frankfurt am Main. His professional activities intersect at the interface between school and university: he is a senior teacher of mathematics and physics at the Freie Waldorfschule Kassel, senior lecturer at the Teachers' Seminar for Waldorf Education Kassel and professor of school education with a focus on phenomenological teaching methods at the Alanus Hochschule für Kunst und Gesellschaft in Alfter. He is also a long-standing board member of the Pedagogical Research Centre. 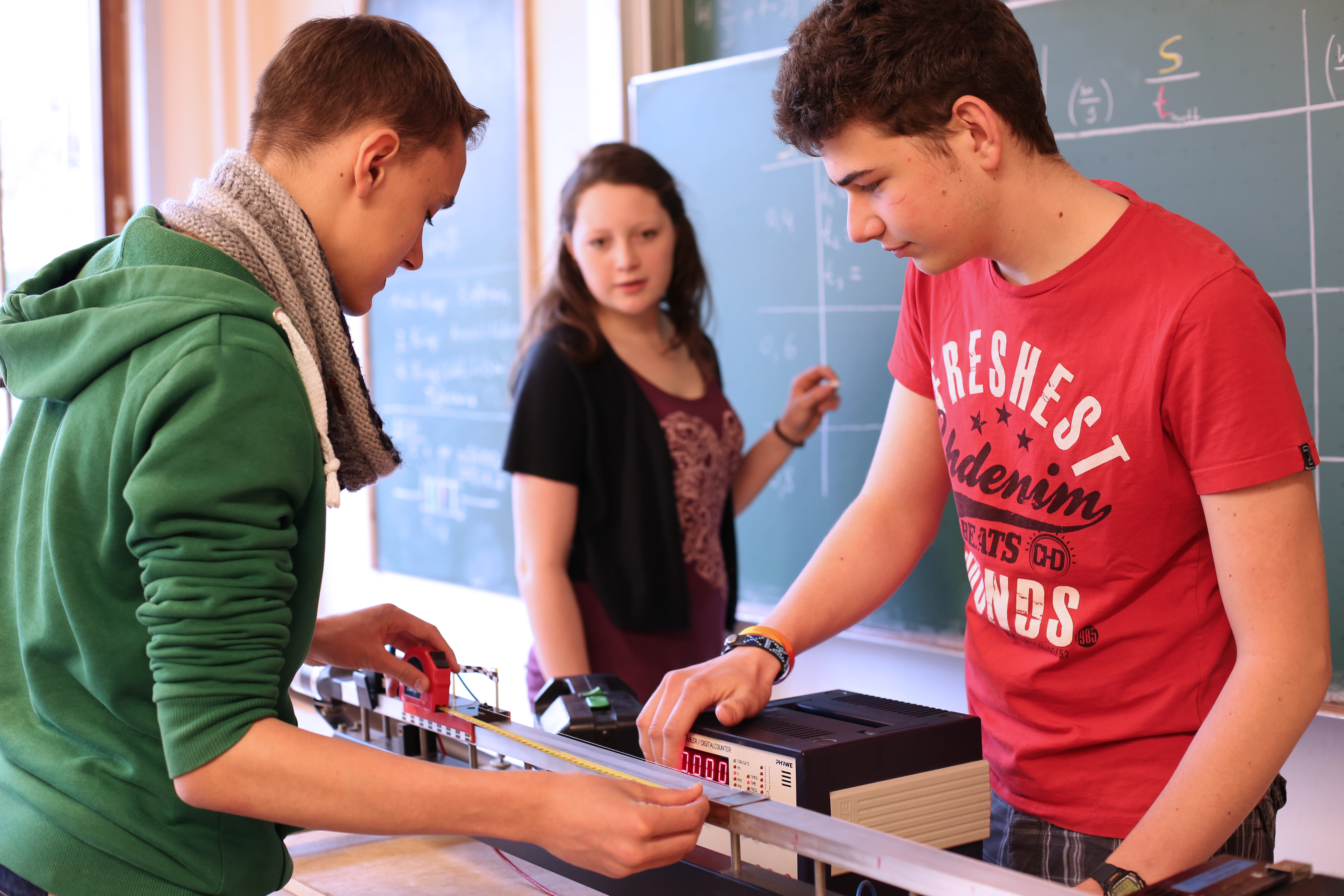