Waldorf education resides today on all continents and in numerous cultures. During many visits to Waldorf “colonies” overseas, the question cannot be avoided as to the extent that this Central European cultural impulse is justified for example in India, China or Central and South America, in cultures which suffered or were destroyed through European colonialism. On the other hand, the focus of anthroposophy on strengthening the individual and on their freedom appears topical and necessary today in view of the one-sided intellectualisation of the school system and the influence of the state on it throughout the world. An example in form drawing.

The world community more than ever needs free and independently thinking individuals who can come together without preconceptions. Yet the Waldorf movement carries a lot of ballast in its luggage which is simply taken for granted. When I ask why a teacher does something this way or that way, too often I am given the answer: “Because I have been told that this is the way I should do it.” I merely single out one example, form drawing, a unique school subject for which we have traditions and recommendations but no firm curriculum. In the countries I have visited, it is customary to draw braided shapes in class 4 which have their origin in northern European, Celtic or Langobardic shapes. It is undoubtedly educationally effective to practice the flowing curves and the wake-up moment of the under and over at the crossover points with these forms. Yet in doing so, we can at the same time easily overlook that the drawing and observing pupil identifies with gestures and with meaning which have their origin in a very specific spiritual impulse.

Rudolf Steiner describes this in a lecture of 13 September 1907 in which he talks about drawing and symbols: “Just imagine how the individual (medieval) craftsman took pleasure in each piece, how he put his soul into it in his work. Each piece contained a part of his soul. And where there is soul in the outer form, there the soul forces also flow across to the person who sees and looks at it. [...] What a person sees, what is poured into their soul from their surroundings, that turns into a force in them. They form themselves in accordance with it ….” (1)

For the orientation of the ten- to eleven-year-old children in their real world, the Waldorf curriculum suggests exploring the local geography and history. This can be deepened in form drawing by seeking for symbols from local cultures and didactically transforming them into linear movement.

In advanced training courses in Peru and Bolivia on the methodology of teaching art, with teachers who are strongly rooted in Aymara and Inca culture, I was confronted with the experience how preparing subject matter from the European Christian tradition caused them a kind of ache in their souls. And so we began to seek emblems and symbols from pre-Colombian ceramics or textile art and prepare them for teaching in line drawing. That made them creative because they could no longer fall back on the excellently elaborated teaching methodology in the ars lineandi of a Rudolf Kutzli. (2) With the joy and enthusiasm of discovery, they developed something new. With material they have worked out for themselves, a teacher enters a much deeper relationship with their pupils than if they have just borrowed something from someone else – a qualitative attribute of interpersonal education. I continued to pursue this impulse in India, China and various countries in Central and South America.

The earlier and the more original the linear designs of ancient or indigenous cultures are, the closer we come to what Steiner describes in the same lecture with regard to occult symbols and emblems which have been “extracted from the essence of things”, which means that “we can look into the conditions in the spiritual worlds”.

If a teacher can really immerse themselves in the shapes and effects of these linear movements, which are at work, after all, as formative or sculptural forces in all living things, they will have no difficulty in connecting with remarks on drawing and painting in the second septennium which Steiner made in a lecture on 22 September 1920: “These are the forces which come to conclusion with the eruption of the adult teeth, which previously modelled the body of the child, the sculptural forces, and which we use subsequently, once the adult teeth have emerged, to encourage the child to draw, to paint and so on. These are mainly the forces which are placed in the child from out of the spiritual world in which the child’s soul has lived before conception, in the spiritual world. At first they are at work as physical forces forming the head and then from the age of seven as soul forces.”

The languages of the symbols of indigenous cultures originate in the direct connection of those periods and peoples with the elementary forces in the world; they are not explained. That is why we have to feel our way into the gestures contained in the languages of their lines. That, too, is part of the deeper creative preparation of a teacher. I would like to illustrate this with an example when I was given an explanation as I puzzled over the meaning of a motif: a combination of lines which keeps reappearing in architecture, ceramics and textile art from the Mayas in Mexico to the Mapuche in southern Chile: the composition of a spiral with steps, a harmonious combination of curved and straight lines.

This is how the course participants worked on this motif.

Motifs from rolling stamps of Mexican and Colombian textile art

Young people from precarious circumstances in the mountains of Colombia studied archaeological finds in a museum: clay spindle whorls on which indigenous women had drawn individual designs (approx. fifth century AD). In a form drawing workshop, the young people practised the gestures contained in the movement of these forms on a large scale – and were visibly pleased when they presented their results to the museum.

From a teacher course in Mumbai, South India

Comment by the author of the braided volume: "These are the eight steps of Buddha".

Almost all these examples of a new impulse in form drawing are made with extensive areas of colour; that is the last work stage. The first has to be the frequent and increasingly fluid practising of the linear movement tracks because it is this sensorimotor activity which works most deeply into the constitution of the person and connects the latter through active feeling with the original formative forces of its culture.

Thomas Wildgruber, a class and art teacher for many years, has produced the handbook Malen und Zeichnen 1. bis 8. Schuljahr which is also now being published in English, Chinese and Spanish. He advises schools and gives advanced training courses worldwide in the methodology of teaching art. 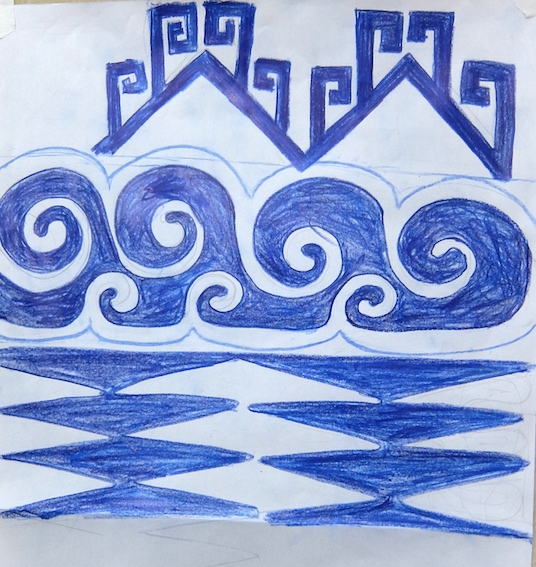