The boom in 'Waldorf Dolls' raises questions about the significance of these types of dolls. Philipp Reubke, senior Waldorf kindergarten teacher and member of the International Association of Waldorf Kindergartens (IASWECE) asks, 'what is a Waldorf Doll'? Is there a 'real' Waldorf Doll?

Waldorf dolls can be bought in many larger Waldorf schools, in some toy stores, and of course on the internet. There are even a number of manufacturers that have applied for “Waldorf doll” as a brand name. But are these commercially available dolls actually the real, original Waldorf doll?

Rudolf Steiner often spoke about the special qualities and needs of the young child, as well as the inner attitude and soul qualities that the adult needs to acquire in order to support the development of the child. However, if one is looking for a detailed description of how a Waldorf kindergarten should look like and the concrete activities that should take place there, these are not to be found in Steiner's work. No program and no recipes!

There are, however, a few exceptions, a few details that Steiner describes quite concretely. And the doll is one of these. One can simply look up what the original Waldorf doll was to look like.

In his first publication on education in 1907 Steiner wrote:

“You can make a doll for a child by folding up an old napkin, twisting two corners into legs, the other two corners into arms, a knot for the head, and painting eyes, nose and mouth with blots of ink.” (1)

And many years later (1923) he said something quite similar:

„Give a child a handkerchief or a piece of cloth, knot it so that a head appears above and two legs below, and you have made a doll or a kind of clown. With a few ink stains you can give it eyes, nose, and mouth, or even better, allow the child to do it“. (2)

And in one of his final educational lectures, again:

„But if you make a doll out of a napkin or a handkerchief with two ink spots for eyes, a dab of ink for a mouth, and some sort of arms, then with imagination the child can add a great deal to it.” (3)

This has nothing to do with the so-called Waldorf dolls that one can purchase today. Even more radical: there is no such thing as 'The' Waldorf Doll!

An old napkin will look different each time – it could be a handkerchief, and it becomes clear in the quotes above that this kind of cloth and the spots of ink are not specified. If one wants to be free, one can feel encouraged to explore other materials, for example, a piece of wood, cork, or whatever one has on hand. Thus the Waldorf doll will look completely different each time, and can adapt to the life circumstances of each kindergarten, the capacities of the educator, the desire and imagination of the children, the culture and the socio-economic conditions. It is flexible, accommodating, and multicultural – very modern!

However, the Waldorf doll has some serious disadvantages for our current taste: it can’t be bought, one can’t make money with it, it is modest looking and not always beautiful, one has to make it oneself, it is never simply available, and may look more like a little radish than a Barbie doll; it appears and disappears quickly.

It is astonishing that the disadvantages seem to outweigh the advantages for many Waldorf kindergartens and child care centres where one does not necessarily find many real Waldorf dolls. Do we find them too modest looking? Do we think that the children will be bored by them? Or is it too hard to do such simple handwork ourselves? We could actually practice with the Waldorf doll, because, according to Steiner, it is the least challenging craft activity imaginable.

In order to encourage the growth of the worldwide population of Waldorf dolls, we offer here again a summary of arguments by Steiner why these ephemeral but extremely lively companions are so important for the development of the child. And we also add here some comments from contemporaries, whose tone reminds us of what Steiner said 100 years ago.

'If the child has before him the folded napkin, he has to fill in from his own imagination all that is needed to make it real and human. This work of the imagination moulds and builds the forms of the brain.'(4)

'As the muscles of the hand grow firm and strong in performing the work for which they are fitted, so the brain and other organs of the physical body of man are guided into the right lines of development if they receive the right impression from their environment...Give the child the so-called ‘pretty’ doll, and the brain has nothing more to do. Instead of unfolding, it becomes stunted and dried up.' (5)

' ...such beautifully formed faces, wonderfully painted cheeks, …  this kills the imagination of the child, for it leaves nothing to the imagination.' But with the simple doll,  then with imagination, the child can add a great deal to it.' (6)

Development of Sensitivity and Subtlety of Feeling

'With the so-called beautiful doll we hinder the child from developing the unfolding of a wonderfully delicate, awakening imagination. (7)

In summary: wIth the simple cloth doll, the essential is not in the outer world; it appears in the child’s power of imagination. It is not finished; it arises through activity. The outer world does not impose itself on the child, and delicate imagination can freely develop. Outer simplicity, inner diversity and dynamics – this connection is often mentioned in educational discussions in the last 20 years. Freya Pausewang wrote in an article published in 2011:

'Found objects lead us away from consumerism and dependence on specially prepared material, as well as from money. The material stimulates the child to improvise, develop ideas further, accept challenges, and master new situations. The child plays with greater self determination.' (8)

For this reason, a number of kindergartens in Germany have initiated 'toy free' play time:

'Little children are so overloaded with toys and other consumer products that this can lead to an inability in later youth and adulthood to know what to do with themselves. Because of this assumption the 'toy-free kindergarten project' arose. Children should learn with the help of the project, to 'find themselves' and to get to know their own needs.' (9)

And the text of a website for parents in the USA reminds us of Steiner’s old napkin:

The author Colleen D. Multari distinguishes between toys that are 'closed' and determine the course and the outcome of play, and toys that are open-ended and leave the child free to independently shape the course of play. The open-ended toys foster creativity and the capacity for problem-solving. (11)

In conclusion, a quote from the French psychologist Régine Démarthes:  'It is the manner in which a child acts with a toy, that makes it complex and alive in the child’s eyes. But when the toy imposes its complexity on the child, it cripples the child’s creative imagination.' (12)

Philipp Reubke has been a teacher at the Waldorf Kindergartens in Colmar and Mulhouse/France. He is a board member of IASWECE.

(1) Steiner, Rudolf: The Education of the Child in the Light of Spiritual Science” GA 34.

(4) Steiner, Rudolf: The Education of the Child. Op cit.

(11) “Closed-ended, toy-directed play does not allow for creative exploration or imaginative play, and it also limits a child’s ability to problem-solve. Surprisingly, simple toys offer more play opportunities to children than complex toys. Simple toys with multiple uses allow children to be in charge of the resulting play. Open-ended toys result in open-ended play. This type of play can evolve over time while also encouraging children to create and problem-solve as they explore the world around them.” 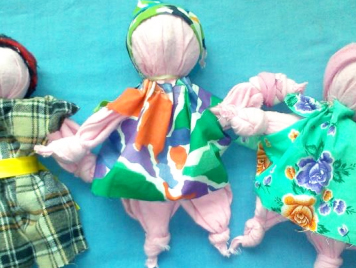