Free Play – Now and Then

For a long time, free play has been neglected for the sake of early literacy and numeracy. The appreciation of free play has only been revived in the last few years. But is it really seen and understood for what it means to the child? How do we, as parents and educators, approach free play? What does it mean to us?

Sometimes I chuckle when I watch children absorbed in play. A lot is similar or the same as it was when I was a child. There are the same twists, gestures, processes, interactions, dialogues. Even when I listen to the elderly talking about how they used to play, I realise how much we have in common.

In children’s free play everywhere, in other countries and societies, we see similar basic elements and structures. Cultures come and go but the archetypal, primal form and quality of free play seems timeless. It is universal.

Nevertheless, a lot seems to change. For example, the material and amount of toys change alongside societal changes. However, I can see that the basic topics recur in variations, again and again: Playing family, digging and building, going to work, caring for something, going out into the world such as setting off on a trip etc.

The fact that it is always the same – and with that we have defined the one crucial element of free play – is a unique possibility for the child to express herself, to take action in the world, to understand, to create, to deal with issues, to discover, to imitate, to try again and thus to develop. It is a chance to be in touch with oneself and with the world.

Personally, I find it very important to differentiate what the basic, primal quality of free play is (1). Primal in the sense that everychild, everywhere, always plays firstin this way.

For a child to play at all, her basic human needs have to be met. She has to feel safe, she has to be part of a community where she is seen. Free play is an expression of autonomy and creativity and must be allowed to happen without having to meet any expectations whatsoever. Only then can the child be free in play.

For the child, playing is a form of expression, the first “language” she knew before she acquired her oral mother tongue. It is, so to speak, the language of the primordial ancestor.

Therefore, the primal quality of free play is the soil on which play grows and evolves, according to the surrounding culture. When I speak about play, I mean thisquality of play and not culturally defined forms of play and games, such as football, chess, digital games or any other games with given rules, defined by adults.

Every child plays what he sees and experiences in his environment. The cultural imprint of each form of play changes according to times and society and is therefore secondary in connection with the quality of play. Children may play farm, war, doggy family, Minecraft in the “real world” etc. This cultural aspect is like a particular shade which makes the game, and the world, more colourful.

If we focus too much on these outer aspects of any form of play, we easily forget the essential. To perceive the essential, we have to look beyond the cultural imprint, including “Waldorf culture”. Even if a playroom has been ever so carefully planned and set up, it will not be enough to see and experience the essential element of play.

We need to look deeper if we want to perceive the child in his “ancient” quality of playing and if we want to see it anew. What does the child show me? What does he tell me through his game today? Do I understand his language? What is he moved by?

Increasingly, I see children in my educational practice who can no longer remain absorbed in play; or – to be precise - whose connection to the primal quality of play has been covered up. Their play sequences are short and hectic, they do not find any continuity or “story”. They pick up something, drop it again and take up the next thing; they are not able to linger in play.

Their play is “counting” rather than “recounting”, it is a sequence of affect and effect, as Byung-Chul Han describes a current phenomena of our “capitalism of emotions”. This can go as far as children restlessly annoying and destroying. (2)

How do I approach children? Do I hold in myself the peace, the muse needed to become absorbed in play? Am I, myself, connected to the play so that I radiate an inviting quality? Do I care for this quality within myself? Am I in the play?

Here, I don’t mean that I should play like a child – I could, but this is not the crucial point. I also should not play for them or entertain them. The essential point is to be familiar with the above mentioned quality, that I feel with it, inwardly move with it. Thus, the child can lean on it, can calm down, can rediscover the contact with herself and find her way back into playing.

Thisis today’s necessity for free play: That the adults fully acknowledge its value; that they support the notion that play is the very best possibility for the child to experience the world, to participate, to co-create, to deal with life; and that the adults themselves become part of the process.

I am invited – perhaps even impelled – to recognize this quality of play and foster it within myself. “...unless you become like children...”

Only in a protected environment can children become absorbed in the primal quality of play. This kind of protection is easily marred and drowned out by all sorts of culturally influenced, modern and fascinating games.

The carer can herself be this protection if she cultivates this quality of play within herself. It is not enough to observe and value it from the outside without cultivating it within.

The English word “play” derives from the Anglo-Saxon “plegan” which is found today in the German “pflegen” (English: “to care for”, “to cultivate”. Translator’s note). What do I cultivate when I play? How can I care for play?

We can easily be influenced by the paradigms of today’s meritocracy and education system and thus loose sight of this quality of play. Even in the Waldorf world we are not immune to to this kind of loss.

If I want to be a goodor realWaldorf teacher, I have already lost contact with the kind of protection mentioned above because then a secondary value judgement is becoming more important. This kind of ego-focus makes me loose the primal contact.

This is my personal task, every day anew, at everymoment because it is the quality of the Now, just like the child’s free play.

The education scene likes to clothes itself in new concepts. At the moment the term “competency” is very fashionable. In the Waldorf world we also like to flirt with it, especially if the authorities want us to justify the current value of Waldorf education.

The Latin for “compentency” is competentiaand means aptitude. The corresponding verb competere means to come together, to be sufficient, to be capable. Commeans with and peteremeans to strive for, to reach for.

Now, we can pick out one interpretation, for example to come togetherund consider it suitable for our work as Waldorf teachers. To be precise, this expression describes meeting a given target and not the encounter of people. However, the other elements of interpretation are always present in the background and so the children are still in a kind of test or competition.

Rudolf Steiner warns of the use of such terminology: “This is why those who wish to describe something from spiritual science should strongly avoid the usual abstract concepts, because this moves away from what really wants to be said. And it is especially true that those who try to understand things in a usual way will tend toward generalities, not sharp definitions.” (3)

Further caution is needed with another central element of contemporary education: “Observation”. Observation is often dissected into every detail. As soon as I observe from the outside, I step out of the primal quality, over the threshold, and then I am in duality, in the distance but no longer in the play.

In the play I am rather in the process of beholding, similar to goethean observation. The key issue is the contact with the child and with myself, so that I am able to perceive the child in her playful activity.

Do I understand where the child moves, what he moves? Do I understand his play language? This deep interest in the child’s play does not have anything to do with any knowledge aboutthe child. It rather has to do with being in play, with the awareness of the play.

It can be an “experience of presence” as Kühlewind (4) calls it, concentrated and absent-minded. The latter means that my consciousness is not driven by concepts, previous experience or targets but that it is empty and open for what shows in play.

This is how I can be the witness of the child’s play, witnessing what she tells me in her play language, but a witness also in the sense of Kühlewind:

“To join the human community and meet the world, a child becomes vertical (upright) in a human environment. Were we to live horizontally, we would be part of the world without witnessing it.” (5)

This means that I am aware of my personal uprightness, as a witness of myself in the world, in play.

Every form of play invites us to preserve our inner malleability by experiencing presence, awareness of play.., “every game or play in which a person has to change, in which they play a “role”, has a healing quality for the soul. It breaks the soul’s routine and strengthens its inner freedom and malleability.” (6)

Do I dare to care for the homo ludens, the playful person, within myself? He or she invites me again and again to remain young and therefore to stay close to the child’s play. The world of play is allowed to have nooks and crannies, it is allowed to be square, round and colourful, every day anew, for the child and for myself as a witness of play.

Rudolf Steiner encourages us: „This kind of free play is what we need to study!” (7)

Gerda Salis Gross is an expert for play and communication, as well as a lecturer and a mentor for personal development issues. She holds an MA in Special Needs Education which she gained through a four year, in-service, research project on play and communication. Gerda is currently a member of the executive board at the Institute for Early Childhood Education Switzerland. She has been a teacher for forty years, mainly at Waldorf Schools for Special Needs Education in Switzerland and Sweden. She is also a mother of five and a grandmother. 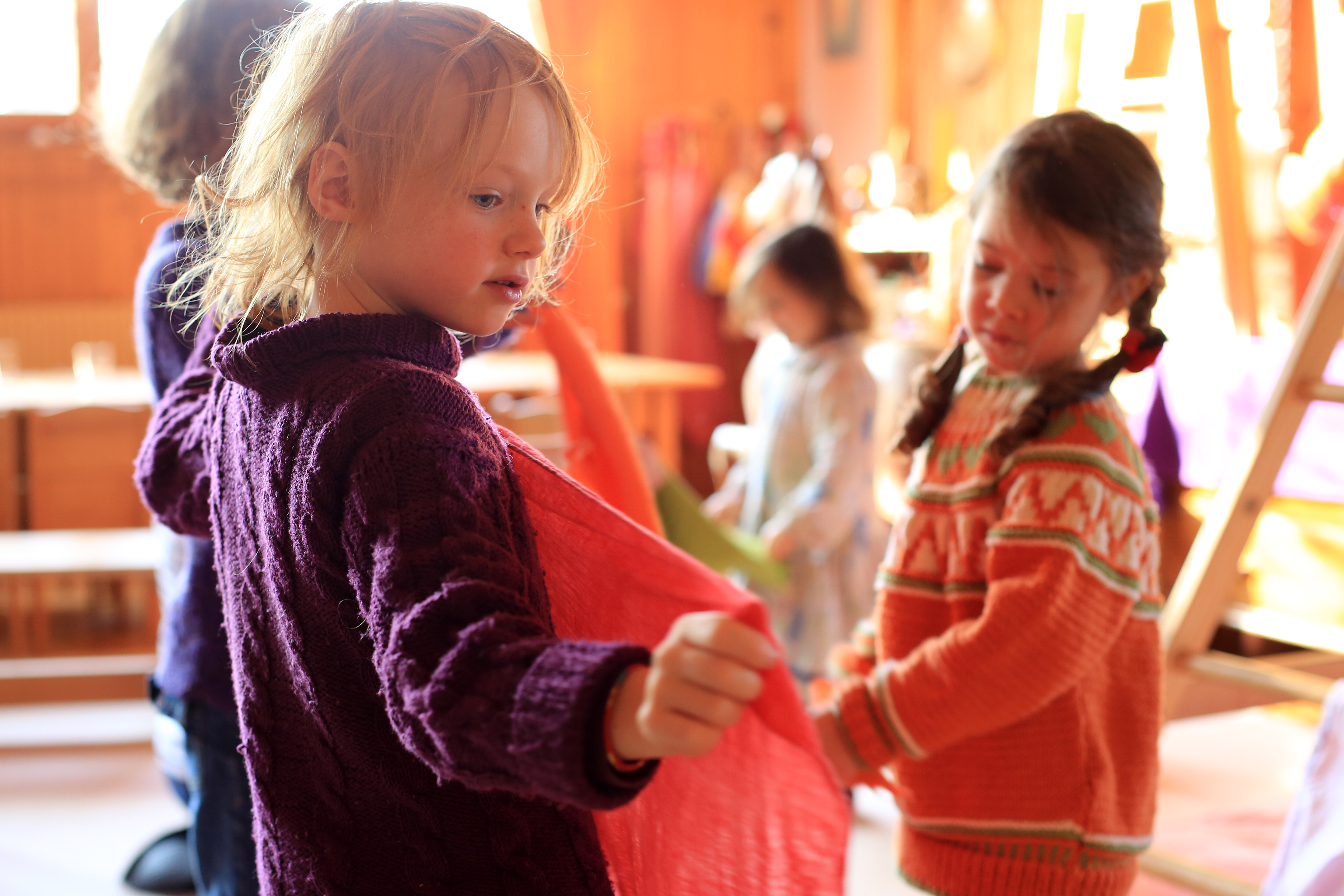