Parent partnership - or parent involvement - is a central concept at Steiner Waldorf schools, but what do we mean by it? Are we thinking of parents volunteering for help at the annual fair or with cleaning the school? Are we talking about “educating” parents at parent evenings? Are teachers meant to guide parents in family life and childcare? How can parents become actively engaged in school development, what are the teachers' contributions and which aspects are important?

Waldorf schools were founded through a social impulse; this impulse lives in the dynamic triangle of teachers, children and parents. In the course of time, certain activities have in many schools become established as ‘typical parent' jobs’ but is this still appropriate today? Parent participation in school has to be adapted to the contemporary situation. For a teacher to lecture the parents at the parents' evening, to reduce the so called ‘parent partnership’ to baking cakes with the assumption that mothers are ‘housewives’, are ways of thinking that need thorough scrutiny.

Parents are themselves professionals; they are trades people or managers, they are doctors or gardeners. A variety of professions and talents are represented through the parents. Due to demographic developments, there are also many grandparents who want to be actively involved in school. This potential must be welcomed in schools. Parents and grandparents do not want to be mere helpers, they want to be actively involved, they want to contribute ideas and be given responsibility. Today, parent involvement has to be founded on true partnership.

Often, we view the other person in their particular role; we see ‘the Teacher’, ‘the Mother’ or ‘the Father’. On the other hand we also speak and act out of our own role. This way of relating may lead to anxiety on all sides. Teachers fear to be considered incompetent by the parents; therefore they hide behind the mask of the all-knowing expert. They can come across as condescending, even towards parents who have been longer at the school than the teacher herself. Teachers sometimes forget that the parents have been with the child since birth, that they know that child and its development in a more intimate way than the teacher.

Parents, on the other hand, may show little awareness for the class as a whole. They are focused on their own child. Their questions are, “Is my child well? Does she get enough attention? Are his individual needs met? The parents expect the school to offer their child perfect learning opportunities. They have chosen the school for their child, they put up with extra financial obligations and additional demands.

Steiner might have foreseen some of this potential conflict when at the parents' evening at the school in Stuttgart on 22nd June 1923 he said, “But above all, we have to focus on our intentions. We cannot hope to gain much from particular instructions, that teachers should address the parents in this way or that and vice versa; but we can expect much when teachers and parents meet each other in the right spirit, with the right attitude.”

Much depends on the right intentions or inner attitude. This is true for the direct encounter between parent and teacher but also for everyone involved in the life of the school.

Parents and teachers embody certain qualities. The school is the teachers' daily workplace where consistency and reliability are created through their work. They might be perceived as a tightly knit and somewhat closed community. Teachers have to find the balance between creating a reliable community while remaining open to new impulses.

Parents, however, are equally a central and essential part of the school. Without them, there would be no school. Understandably, they hover on the periphery, they rarely enter the school building and the older the children get, the less the parents know about school life. Their physical distance, to the school and to other families, leads to the impression of them being somewhat fragmented. However, in the best of worlds they support the school not only financially but also spiritually. This invisible involvement is absolutely essential for the teachers.

In many schools it has proven beneficial to lead parent partnership into a new phase by asking a series of questions:

In which phase of school development are we now?

What is important for our school's current situation?

What visions do parents and teachers have for this school?

In the pioneering years of a school we can count on the initial energy and enthusiasm. After a few years we might notice a certain disillusion and weariness. Furthermore, focus groups and processes have become firmly established. This can allow for some calm after the chaos of the first few years, but we might miss the energy of the pioneering generation. What skills and forms of cooperation are now needed?

Who should be part of which focus groups and participate in decision-making? Discussion around some exciting new ideas for the upper to school or plans to build a new playground, provide opportunities to ask how parents can be involved in the planning and implementation of such a venture.

Should parents be consulted when new teachers are employed and if so how would this be organised? Could parents be involved in drawing up the criteria for new positions?

How do we create open opportunities in which the individual, the situation of the child, the parents, teachers and class community all have their proper space?

In the same boat

If we consciously want to be involved in a school, we also have to say yes to cooperation. However, we might encounter some pitfalls: The participants in a parents' evening are people who have not necessarily chosen each other to work with each other. It is indeed possible that one person's views are not appreciated. It is possible that we do not agree with the manner in which someone brings up their children; sometimes there is a clash of life-styles.

And so it may happen that I sit there, in ‘my’ focus group, in ‘my’ parents' evening or committee with people who seem rather peculiar to me. And my child goes to school with their child! The worried mother in me sees the dreaded invitation to a birthday party at MacDonald's and the abhorrent iPod appear before her inner eye.

There I sit with people whose comments I might consider intrusive, people who are too straight forward, to egocentric, too shy, too modern or too intellectual. Anger wells up because I wish for an open atmosphere at school so that the new, the future, can come about. How do I find a way forward in such a situation?

The most basic skill we need is the skill of listening. We think that the purpose of listening is to find out something from our interlocutor which we don't know, something which will be useful for us. However, the philosopher Natalie Knapp1 points out that the biggest potential of listening lies in finding out something “that the speaker does not know herself”. The ability to listen empathically enables my partner to find clarity in her own thinking. As a pupil once said, “only when I speak do I know what I think.”

The most important task at a parents' evening or in a focus group is to create space for other people's thoughts. This in turn enables further contributions, ideas and visions to emerge. Thus, a dynamic process starts which – according to Natalie Knapp - “awakens the intelligence of a group”. Only then, new steps can be taken. Having said that, we are all children of a world which becomes increasingly individualistic. Empathic listening, mutual thinking and true cooperation does not come easy to us. It means, we have to make an effort to hold back our opinions, our personal agendas and the ever-present ‘I know best’.

Parent partnership is a landscape with an endless variety of features; only a few of them have been mentioned here. Sometimes, the hike is pleasant, an easy ramble, but sometimes it feels like a walk in the jungle or in a minefield. Empathic listening is compass and staff for us all.

Since 2003, Karin Smith has been involved in parent partnership in the double role of mother and teacher at Rudolf Steiner School Ittigen, Switzerland. Sometimes, she seems to be hearing the words of the old Joni Mitchell song "Both Sides Now". 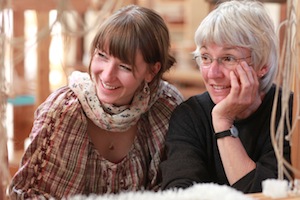