Art as an educational tool has a special place in Waldorf Schools. Artistic activity challenges the imagination and brings out creativity while developing a sensitivity for qualitative differences.

On the one hand it always makes use of a sense-perceptible medium (colour, shape, sound either in music or speech, and so on). On the other, as an expression of a non-sensual formative will, it leads beyond what is merely sense-perceptible. Artistic activity is therefore the best mediator between the physical and the spiritual aspects of the human being while also occupying a middle position between the child's play and the adult's work: "The ideal for which teaching and practical work in the classroom aims is to awaken in children a seriousness towards playing that filled their being during the period when the whole psychological content of their life was to play. When this is understood in the realm of teaching and practical work in the classroom art will be seen in the right light there and it will be applied to the right extent.W (R. Steiner, " Pädagogik und Kunst" in "Der Goetheanumgedanke", GA 36, p. 290; "Education and Art", German only.) Just as conceptual understanding emerges from the activity of inner picturing, so can intelligence be promoted by artistic activity: "When people have grasped how strongly intellectual capacities can be brought out through the use of art in educating children they will grant art its appropriate place in the early years of school." (R. Steiner, "The Essentials of Education", Anthroposophic Press, 1996.)

In his letters on the aesthetic education of man Friedrich Schiller put this point quite radically: "There is no way of making a person rational other than by first making him aesthetic."

When the first Waldorf School was founded art was entirely marginal in mainstream education. Over the past few decades, however, Steiner's view have been abundantly borne out in a number of quarters. The best researched and documented field is that of music in education as a way of promoting intelligence and above all social skills. (E.W. Weber, "Musik macht Schule", Essen 1993; "Music is Education", German only.) In his well-known book "Emotional Intelligence" (New York, 1995) the American author Daniel Goleman shows how important a thorough education of the emotional sphere is in today's violent society. Effective elements in the formation of emotional intelligence are the promotion of perceptive skills and a sense of style and quality, and also of the individual's wish to express him or herself. These are elements which are developed through artistic activity, whereby the emphasis varies depending on the age of the children. The scientist Klaus Michael Meyer-Abich wrote in an essay: "An aesthetic education as an education of perceptive and experiential skills is a crucial factor for the attainment of a perceptive responsibility and a responsible perceptivity towards one's immediate surroundings and the environment as a whole. Had our powers of aesthetic judgement not atrophied as the result of a degeneration in our perceptive and experiential faculties, the current scale of brutal destruction caused by our industrial system would never have come about." (K.M. Meyer-Abich "Dreissig Thesen zur praktischen Naturphilosophie" in "Ethik der Wissenschaften", Munich 1986, p.105; "Thirty theses towards a practical natural philosophy", German only.) On the basis of years of research Howard Gardner demonstrated in his book "Multiple Intelligences" that it is not possible to manage with the traditional concept of intelligence as determined by the intelligence actually needed in life. For him what is expressed in music or in the way we treat our own body is just as much a matter of intelligence as the ability to handle oneself or the other people. Furthermore, these two skills, self-competence and social competence, are key qualifications required by today's world of work. (H. Gardner, "Multiple Intelligences: The Theory in Practice." NY: Basic Books, 1992.)

Waldorf Schools represent the first school model in which attempts are made, indeed have been made for decades, to put such perceptions into practice. 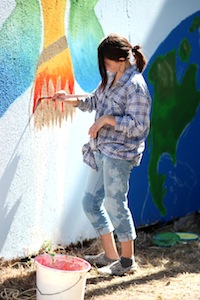